The Croods Tells A Story And So Can You: My Visit To The Dreamworks Campus

The heart of The Croods is a movie about storytelling and the ways in which the stories people tell can inspire, protect and challenge the ones they love.

Dreamworks’ newest animated movie The Croods, which is released in theaters on March 22, tells the seemingly straightforward story of a family who lives in a cave. The dad, Grug, tells stories to warn his family of the perils that await them each day just to ensure that they make it to the next one. Grug’s daughter, Eep, is dying to break free from the rules these stories create and she dreams up a world beyond the small cave and sleep-eat-breathe society she is confined to. Later in the movie, when the family ventures beyond their cave, Grug and Eep meet Guy, a fellow human who is a bit more evolved than The Croods. Guy encourages them out of their myopic world views by telling them stories of a magical world where the perils Grug fears do exist but so do the dreams Eep so desperately desires.

As a designer and an artist, I particularly appreciate the ways in which people,  and in this case the characters in The Croods, tell stories through drawings. Grug often paints crude depictions on the walls of the caves to accompany and dramatize his tales of warning. At one pivotal point in the film, perhaps inspired by the ineffectiveness of his cautionary tales, Grug creates a cave drawing of his family (you can get a low-fi sneak peek of Grug’s drawing in the below picture on the bottom right on the computer screen) encircled in his arms: the family’s perennial protector.

The drawing Grug makes is the work of Margaret Wuller, one of the film’s Visual Development Artists. Last month, when I went with a group of bloggers to the Dreamworks campus, Margaret showed us how she first came up with Grug’s drawing. In the age of computer animation, which The Croods showcases fabulously particularly via its use of the newest 3-D technology, it is rare if not impossible to see an animator’s original artwork in an animated film. The Croods‘ cave drawings and the stellar opening credits feature a rare bit of this old fashioned artistry.

In the workshop for the bloggers, Margaret and another Visual Development Artist Arthur Fong showed everyone how to create her own cave painting style family portrait. 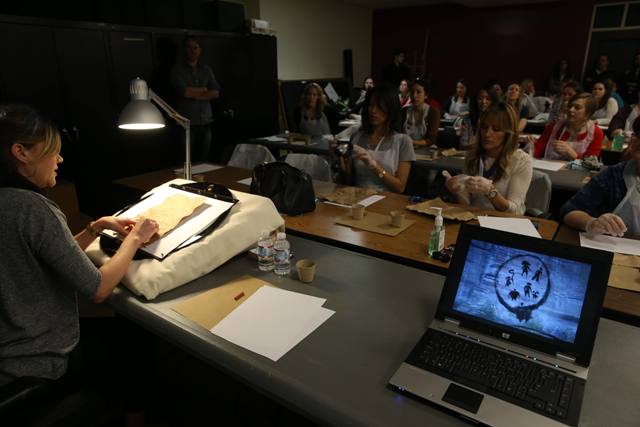 Here I am hard at work on my work of art: 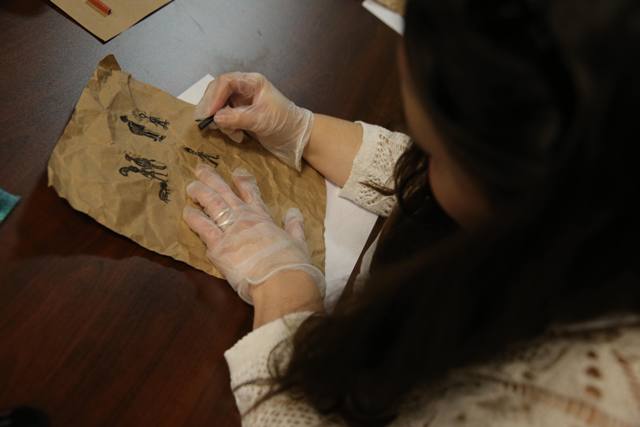 Below is the finished version of my “cave painting” of all the various members of my extended family: 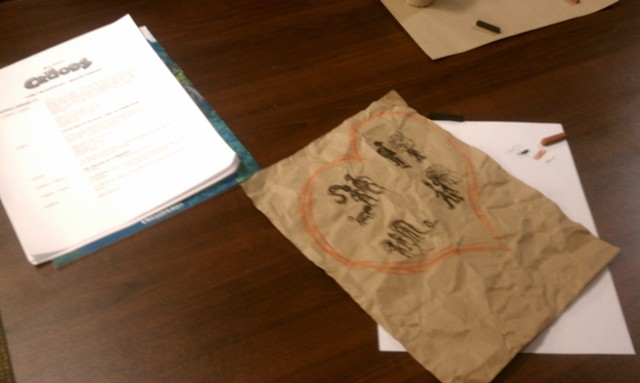 Here is how to make yours:

Take a brown paper bag from the grocery store. Use the inside of the bag (without the writing on it) and cut an 8.5 x 11 sheet out of it. Crumple the piece of paper up and then flatten it out, mimicking the texture of a cave wall. Then use a black crayon or a piece of conte crayon, a thinner and harder version of a pastel, to etch out your faux cave drawing. The trick is to exaggerate each family member’s most defining characteristics in order to make each more than a definition-less blob. I made my sister’s trademark ponytail almost comically large while Margaret made sure Eep’s signature wedge hairdo was readily identifiable.

Hopefully through this little exercise you and your family will be able to tell at least one of your stories. For those of you who are now truly inspired, head over to Pinterest for more The Croods related DIYs.