Story, Art And Animation: More On My Croods Visit To The Dreamworks Campus

The most incredible and readily observable aspect of The Croods is the way in which the film utilizes 3-D technology to enhance aspects of the story. I will not go into too much detail about the plot elements of The Croods. When I saw it I knew practically nothing about the movie and I really believe that benefited my appreciation of it. However, there is one scene where fire is first introduced into the plot and the burning embers from the blaze seem to float away and into the air of the theater. In other scenes, particularly a fast-paced chase, the action appears to come from behind the viewer, leap over their shoulder, run through the theater and off into the distance. In one scene in which The Croods‘ daughter Eep stands at the top of a tall precipice I actually felt nervous as if I were actually standing there myself. 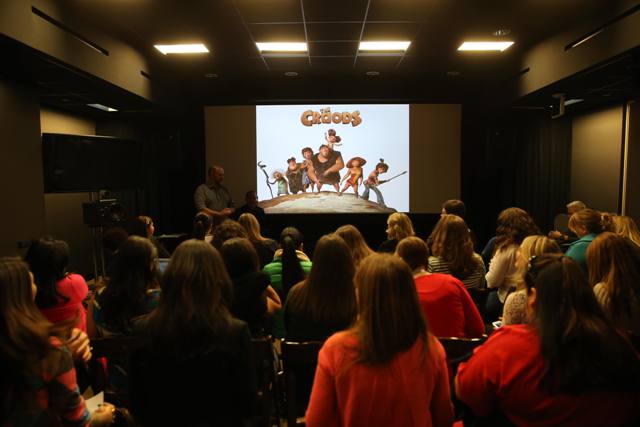 In February, when I had the unique opportunity to visit the Dreamworks campus, I was able to appreciate some of the less observable though equally captivating aspects of the movie: how the film’s behind-the-scenes work created The Croods story, world and characters. 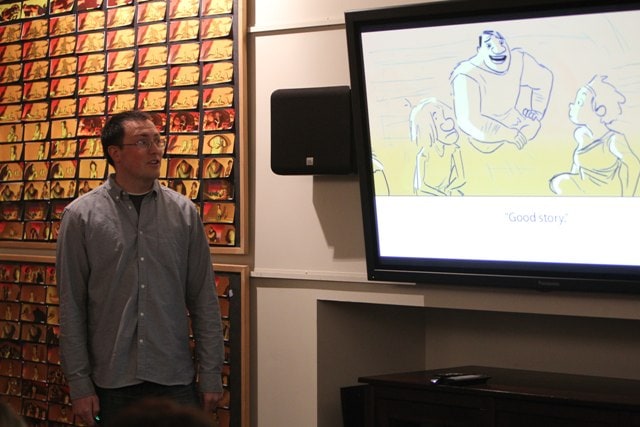 The Croods‘ Story Board Artist Steve Macleod (pictured above) explained how before the 3-D computer animation process began he and other Story Artists used the script, along with input from the movie’s directors Chris Sanders and Kirk DeMicco, to roughly sketch out the action of the film. Their story drawings served as a series of sequential sketches that guided the team through the movie’s story. As you can see in the below pictures, typically the sketches themselves were quite rough even when they were brought a bit more to life through the use of color. The sketches were designed this way so they could be altered regularly as the version of the movie evolved and thus the sketches helped crystallize broader concepts of movie. Through this process, the filmmakers and the story team were able to elucidate that the single most important theme for them to convey in The Croods was the concept of “family relationships.” And thus, these sketches guided not only the incredible action sequences of this movie but also the thematic elements that all come together to create a particular impression on the film’s viewer. 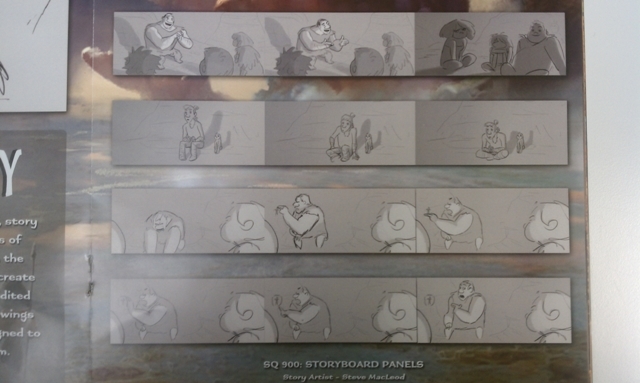 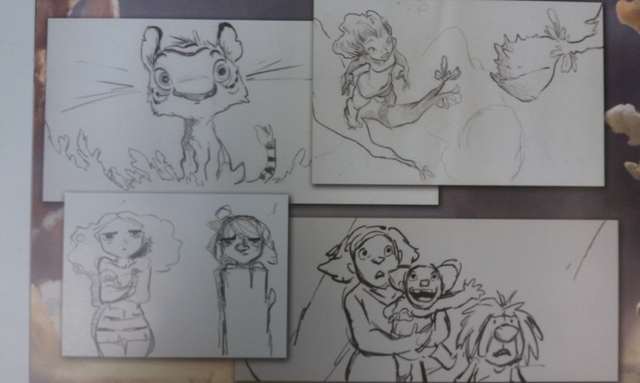 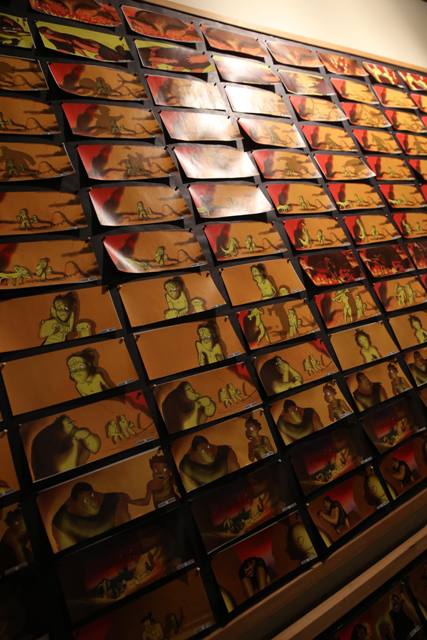 Along with the Story Board Artists, The Croods‘ Art Department was integral in bringing the story off of the page and executing the particular vision of the filmmakers. As the Art team explained, “this new world of The Croods was created to be something fantastic, but we didn’t want it to feel like an alien planet; it needed to be grounded in the rules of reality.” Thus, the “background”/other elements of the film such as the animals, terrain, flora and fauna in The Croods world evolved from the inspiring drawings and models created by the artists (as pictured below) along with real life research. 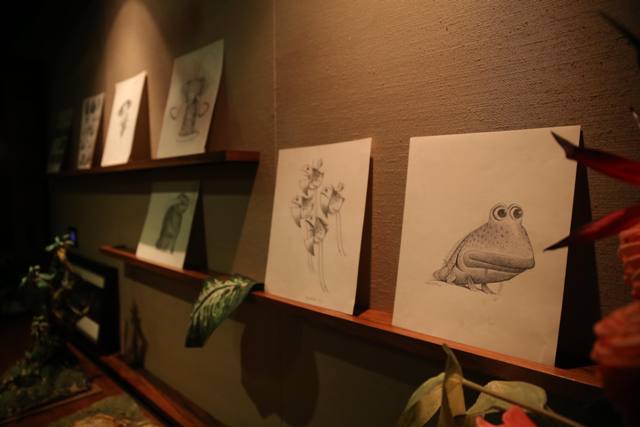 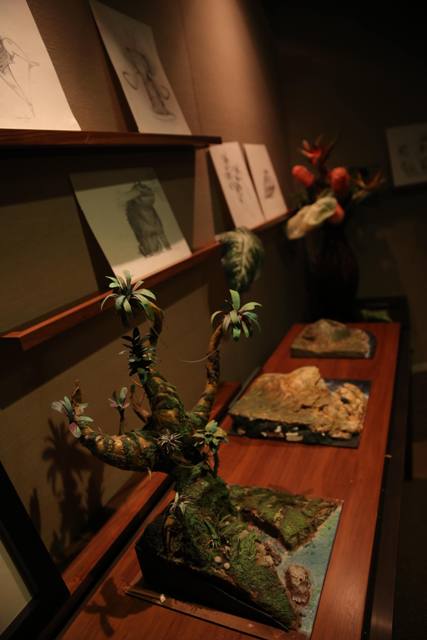 During one portion of the trip, the bloggers participated in a “Guess That Croods‘ Animal” game inspired by the hybrid animals seen throughout the movie. Director Chris Sanders described how one of the artists Shane Pregmore came up with the idea “to take animals and combine them … [so that you] could almost imagine, a long time ago, animals were different combinations that maybe, as time went on, they diverged into separate things.” When you see the movie, try to spot the Hippodillo or the Skarkadile and all of the other mutant animals. Can you guess what kind of animal Douglas, The Croods‘ pet pictured below with the son, Thunk, is? 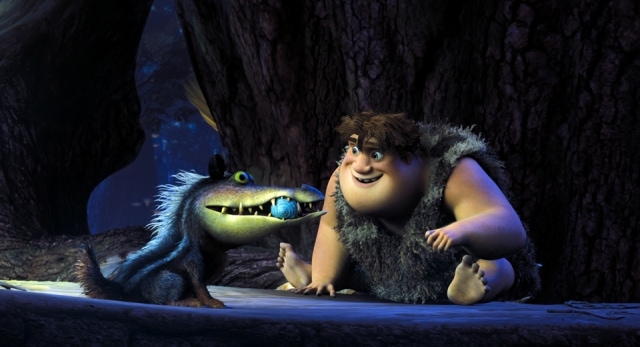 Once The Croods story was mapped out and the overall aesthetic of the film was conceptualized, the movie was ready for the Animation team to put its stamp on things. Much in the same way that the film’s artists articulate the background elements, the animators create the characters, defining not only who they are but also the specific ways in which they express and carry themselves. One of the bloggers at the event pointed out how easy it was to see Emma Stone’s unique facial expressions and mannerisms reflected in the way her character Eep was animated. This is because the Supervising Animator Lena Anderson reviewed footage from the lipstick camera (the camera that films the actors as they record the voices) of Emma Stone, noticed the particular ways she manipulates her face and incorporated them into the way Eep also expresses herself. However, it is not just the actors themselves who influenced a character’s formation. For The Croods, the animators naturally incorporated a lot of animal-like elements into the ways in which The Croods move. Jame Baxter, Head of Character Animation, described how Sandy, the baby, was the most fun character to animate because she “is practically a feral dog ready to bite everything she sees” and thus throughout the film she is mostly gnawing, growling and barking at all those around her. 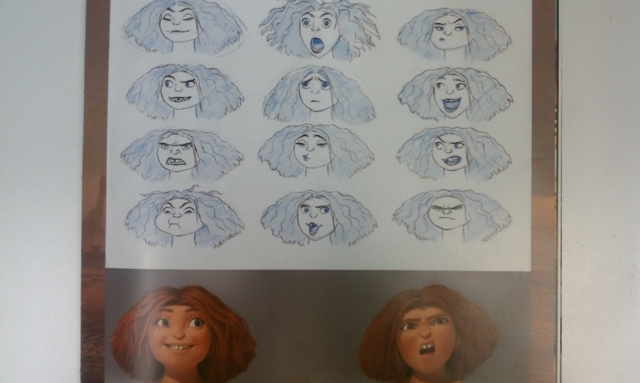 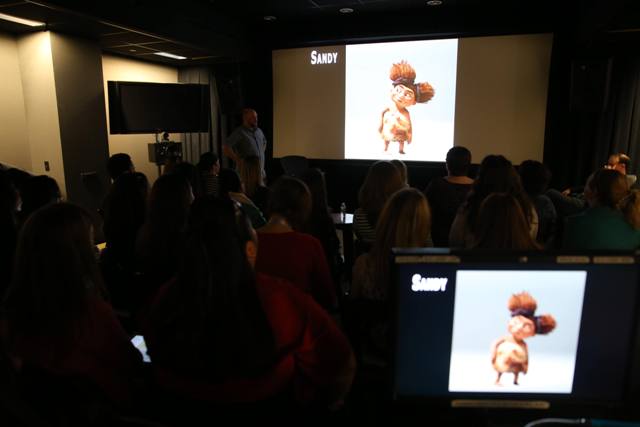 The Croods has a lot more of a back story to it, more than I could possibly ever describe. Whether you see the movie before or after you read this post, I hope learning about these behind-the-scenes elements enables you to appreciate the great amount of work that went into creating this movie’s enchanting world.

Photos contained within are courtesy of Dreamworks and Eric Charbonneau.