You guys! You know that I am seriously a gamer for LIFE. I’ve owned every single gaming console since the first one hit the market in 1497. I think I had children JUST so I could use them as excuses to buy video games and VR headsets and gaming PCs and create YouTube streaming accounts. It’s all about me and my desire to BREAK THE CODE OMG! Well, I’ve been dreaming of the day where I could submerge myself into an ACTUAL game ever since the original Tron movie. Not the weak remake – the ORIGINAL. And now, I’ve experienced it. I’ve walked through an adventure. I literally became a character with pudgy orange hands and I threw pancakes at people at it was marvelous! Ralph Breaks VR was SUPER FUN and is something that your entire family needs to GET IN ON! Like… immediately. You too. Don’t sit this one out because you don’t know how to hold a controller. Get over it. Put the headset on and WINNNNNNNNNNN. 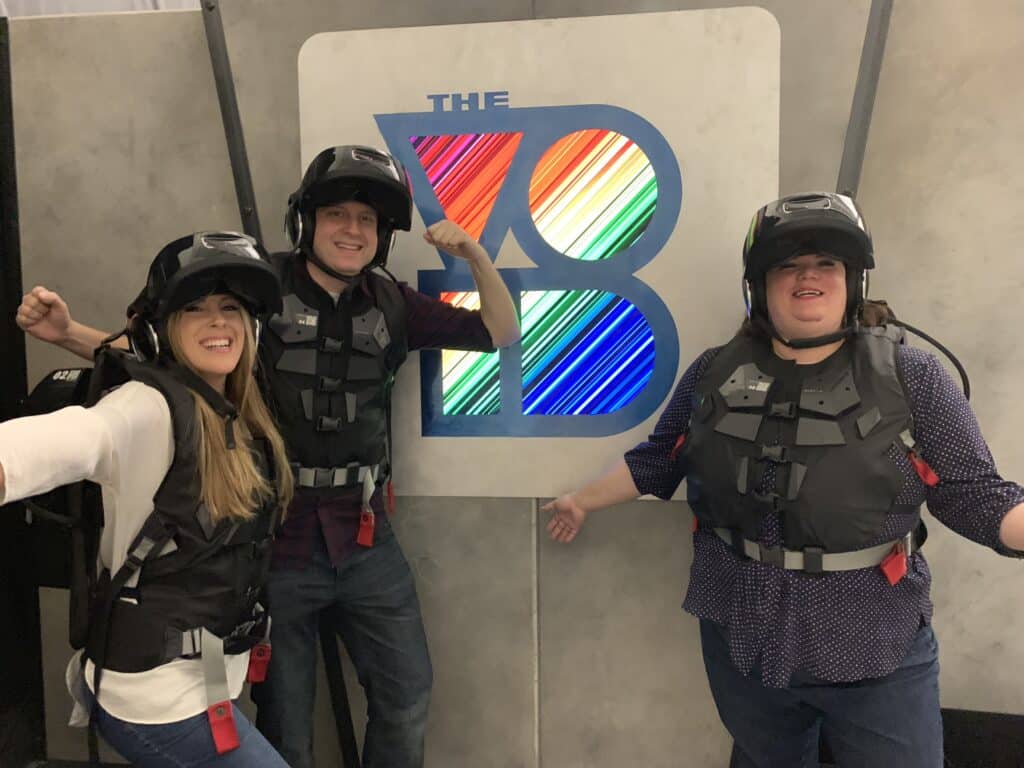 So, who is responsible for this adventure? The VOID, the global leader in immersive virtual experiences, and ILMxLAB, Lucasfilm’s award-winning immersive entertainment division. The two companies teamed up to bring Walt Disney Animation Studios’ upcoming film Ralph Breaks the Internet to hyper-reality in Ralph Breaks VR. AMAZE-BALLS OMG.

I want to tell you a little bit about my entire experience so you know what to expect. Ralph Breaks VR is an original multi-sensory, immersive experience. Sound fancy, right? It basically means that you pop a headset on and WALK through a course. You can see the course through the headset, but it’s digitized and looks like you are INSIDE the Wreck-it Ralph WORLD. I almost didn’t believe it was possible as they were explaining it to me, but it all just worked. 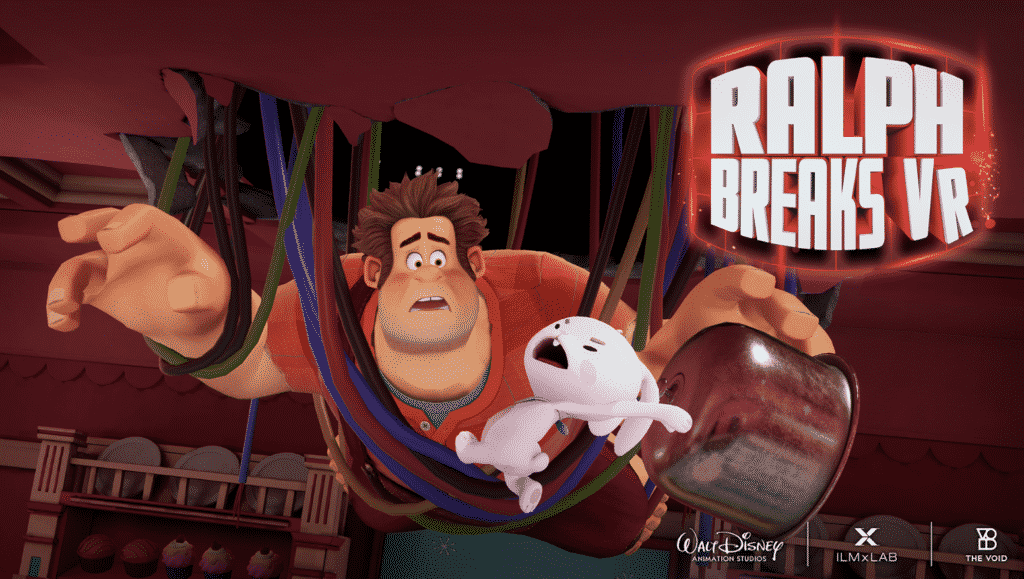 How Many People Can Be On My Team?

You can have a team of four guests with you. There are only four characters in the game – so no exceptions. I am a family of five and so if we all went together, we would have to split it up two and then three. Or I would just go twice… which is probably what will happen.

Are Wreck-It Ralph and Vanellope von Schweetz In The Game?

Yes! They kick off the full adventure!  The pair kick off the game disguised as characters from the film called “Netizens” to play the newest, coolest video game ever. Ralph Breaks VR introduces two brand new locations, Dunderdome and Pancake Milkshake Diner, and a new antagonist, B.E.V. voiced by writer Pamela Ribon, which stands for “Built to Eradicate Viruses.”

Any Tips About The Headset?

It had to be straight on your head. If you feel like your vision is a little blurry, just adjust it slightly and all will be well. There were a few times when I was walking that my headset moved a bit. All I had to do was push it back down to the center of my eye range and everything was perfect again.

Is Ralph Breaks The VR Violent?

I mean… the first thing I said when I walked in the game was,  “Do I have to kill everyone in this room to win?” because that’s the type of gamer that I am. I thought I had to completely annihilate all my competition like paintball and was willing to take out every last human and kitten in my site… but no, it’s not like that. You are throwing cute objects at people who are trying to ruin people’s lives. The whole thing is adorable if I am being honest with you. So, I PERSONALLY do NOT find this game violent, but I do have to note that you ARE carrying around a gun. So, that is a decision you have to make.  I want to be clear about that for you. But just know that there is nothing gory or traumatizing happening once you are inside. This IS DISNEY. 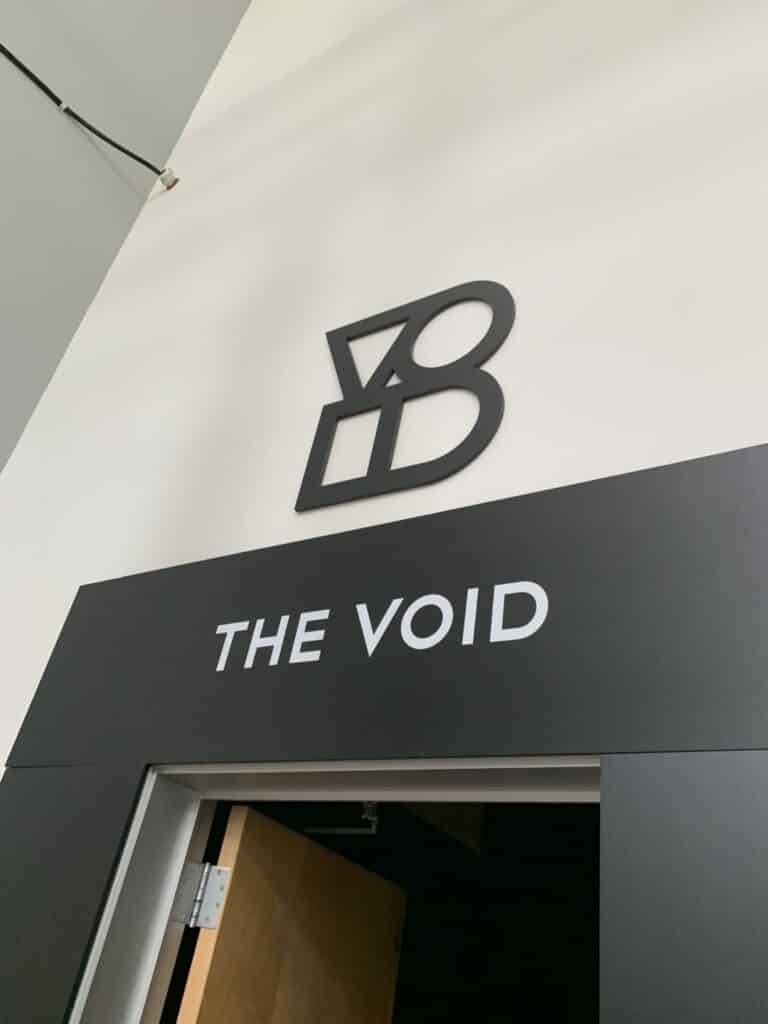 Where Can I Find Ralph Breaks VR?

When Does Ralph Breaks the Internet come out?

The movie hits theaters November 21, 2018. Be sure to see it. You don’t NEED to see the movie to appreciate how AWESOME The Void is, but it will make the experience BETTER if you do. But again, it is NOT NECESSARY to see the movie in order to get tickets to The VOID. 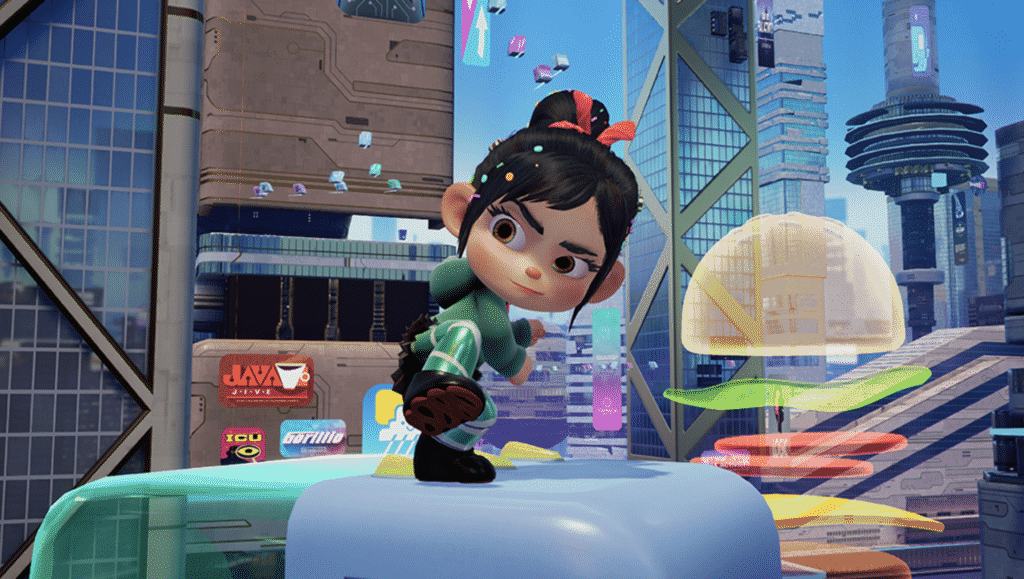 What Are Some Things You Do Inside The VOID?

I really don’t want to give too much away, because I want you to go in and experience this NEW adventure with FRESH EYES, but I will tell you that once you put your headsets on … everything changes. The three other people you bring along with you BECOME other characters. You no longer see them as themselves. They literally become cartoon people. That was so surreal. So, as they walk around and lift their gun and walk through doors, you are seeing it all happen BUT as if a cartoon animation is doing it. It is WILD and amazing.

There are tests you have to pass. You need to rely on teamwork. And naturally, you have a mission. What is a game without a mission??? 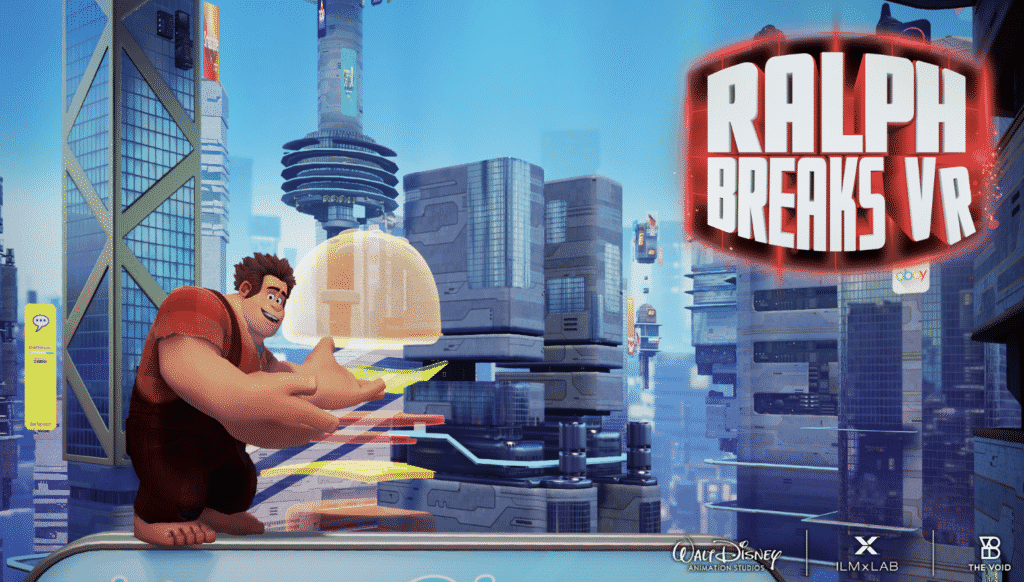 Pancakes and milkshakes (digitally) included! Are you ready for this multi-sensory hyper reality? I hope you are because I have a feeling this is IT. The beginning of our future. IN 20 years, I feel like everyone will have one of these pods in our houses and that’s how we will game and experience the web and… I CAN’T WAIT. What does that say about me? I don’t know. I’m just so thankful that I will be 60 and still alive to experience it.

In Ralph Breaks VR, you and your friends will sneak onto the internet to play the newest, coolest video game ever. Don’t miss out on this one. You and your kids will L-O-V-E it.

Disney invited me to LA to attend the red carpet premiere of Ralph Breaks the Internet. Travel and accommodations were covered. All opinions are my own.