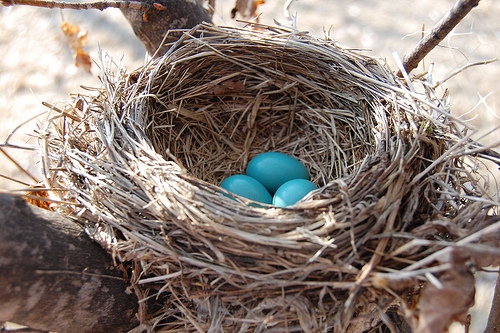 I didn’t realize that I was nesting until a few friends pointed it out to me on Facebook yesterday. Typically, Bill and I sort through the kids’ toys three times a year – right before their birthdays and then again right before Christmas.  This helps us manage the LEVELS. We can’t keep it all. We just can’t. Besides friends and family members, my children also get to reap the rewards of being a mom blogger’s child. Lots of things pass through this house for review. It only makes sense for us to give to the poor three times a year.

Well, yesterday I was thinking about my basement and how I havent’ seen it in about 4 months. I slowly walked down the steps (because I’m allowed to now) and saw a war zone. Not an inch of the floor was clear. I could barely walk that’s how insanely messy it was. Out of CONTROL.

I asked Bill to throw down some garbage bags and the two of us went to town. I dragged a chair with me from one section to the next and sorted through utter chaos.  Not only were there a million toys that had to go… but there was so much GARBAGE. The kids apparently have been bringing down empty boxes and ripping them apart. WHAT? Besides the juice boxes, we found a dozen socks from play dates, half drawn papers and bubble wrap. I mean – you name it was discarded down there! So much TRASH.

The kids came home from their play date and jumped right in. I gave them each a garbage bag and told them to collect toys they wanted to give to the poor and thankfully I didn’t get many complaints. In fact, they gave more away than I thought they would. I was very happy to see that.

At around 8PM, we all stopped and got washed up and ready for bed. I began to look for my iPhone and couldn’t find it. Of course, the first thing I thought was that is accidentally got thrown into one of the garbage / poor bags. My husband went outside and re-opened up every single one to check and see if the kids made a mistake. When he came back in empty handed, we then went through every bin in the basement. This was until almost until midnight folks! Totally insane.

I gave up. Told him that I just had to get a new phone. It was gone. He didn’t want to hear it.

Finally, at around 12:30, he searched in my robe pocket and what do you know? There it was! OMG he wanted to kill me. The entire time I was blaming the kids! EEK! We both collapsed after such a hectic day. I haven’t done that much work in MONTHS AND MONTHS. It felt good but I did get a little dizzy towards the end. That was another reason I had to slow it down.

So, all is good. Apparently, nesting has officially begun. I guess I should tackle my cabinets next? Who knows what today will bring!? LOL