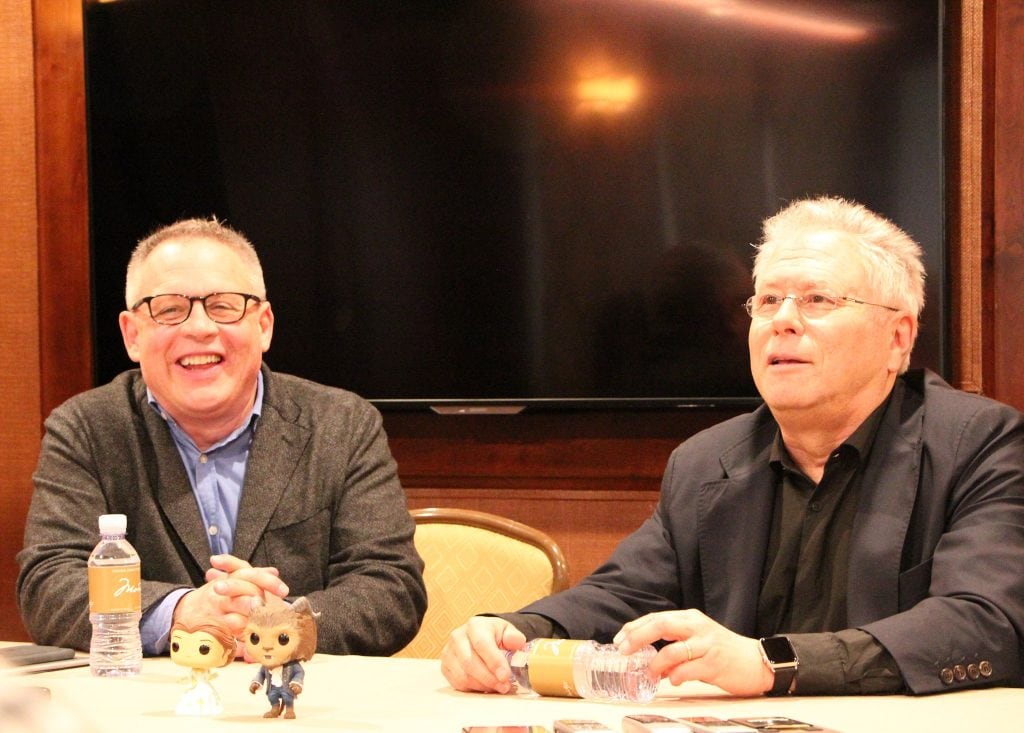 Alan: The new songs are brand new. Days in the Sun – before Bill was on as a director (this goes back to about 2008) – there was discussions about a movie version of Beauty and actually went as far as early script and when I was in London working on Sister Act Tim was there and I said let’s try, you know, working on a couple of songs. The Days in the Sun, the genesis of that actually began back there as sort of a lullaby moment but once Bill came aboard then that really got reworked, you know, to be a vehicle of so much back story and we’re threading a lot of story to it.

The other songs I would say they were the song we decide at the beginning. Some moments we followed through on. You know, the actual conception of the songs was yes, here they are. The actual execution was two years of here are these songs, you know, black and blue and, you know, we’re gonna reprise it here and we’re gonna put it, you know, so a little bit of How Does a Moment Last Forever into the middle of Days in the Sun. We’re gonna take Days in the Sun theme and we’re gonna put it at the top as the Aria and just, you know you begin, you have these threads and you begin to weave with them. I never pull from a trunk, ever.

I love how he said that he never pulls from the trunk! Because truly that’s exactly what I wanted to know!!! 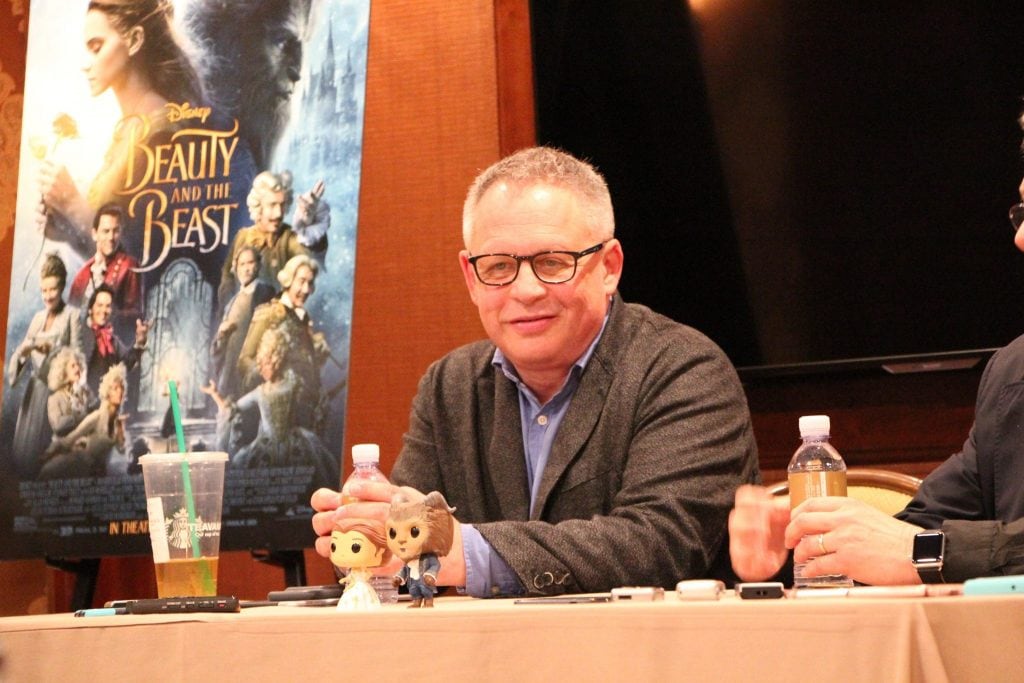 As a director, Bill had to face some tough decisions. The group wanted to know which was the hardest for Bill when dealing with Beauty and the Beast.

Bill: We decided to not take anything out. You know, you look at the animated film and there’s absolutely nothing missing. I would say I’m gonna speak to you for a second that there was a song that was originally conceived for the animated film, put into a reissues of the film and put into the Broadway musical called Human Again, right which is a fantastic song and I think one of your favorites. That was, you know, an early conversation that just felt even in a movie this scale it took two and a half years to do Be Our Guest and Human Again is even bigger in away and that just became something that we had to sacrifice. And so part of the feelings and what happens in Human Again got translated really into Days in the Sun which has a very different feel.

“Human Again” – I gotta say, because of Howard, is a brilliant song.  It really is! But it was always problematic, always. It was a nine-minute sequence going through so many sections and so many edits, you know, basically watching the entire coming together of Belle and the Beast and watching the objects react and going into a scene and coming back to the song. So it was always a challenge to get it in. We ended up cutting it down to about six minutes by the time it got back into the animated movie and then I think it got cut even a little further for the Broadway show but I think in the future maybe we’ll do a whole music called Human Again and make up for it.

It was also about revealing more. It wasn’t about reinventing, you know? So, you start to bring it into the real world and you start to ask questions that didn’t matter in the animated film.  How did Belle and Maurice wind up in this village? What happened to her mother? How did the Prince become such a dissolute figure that he was worthy of being cursed, you know? And, it’s interesting you start asking those questions and you start to bat around what the possible answers are. Then, you know, you’re making something different but I think for me I could ever really rely on my own kind of reverence for the original film in knowing when you’re changing something or going too far. I hope never to cross that line. 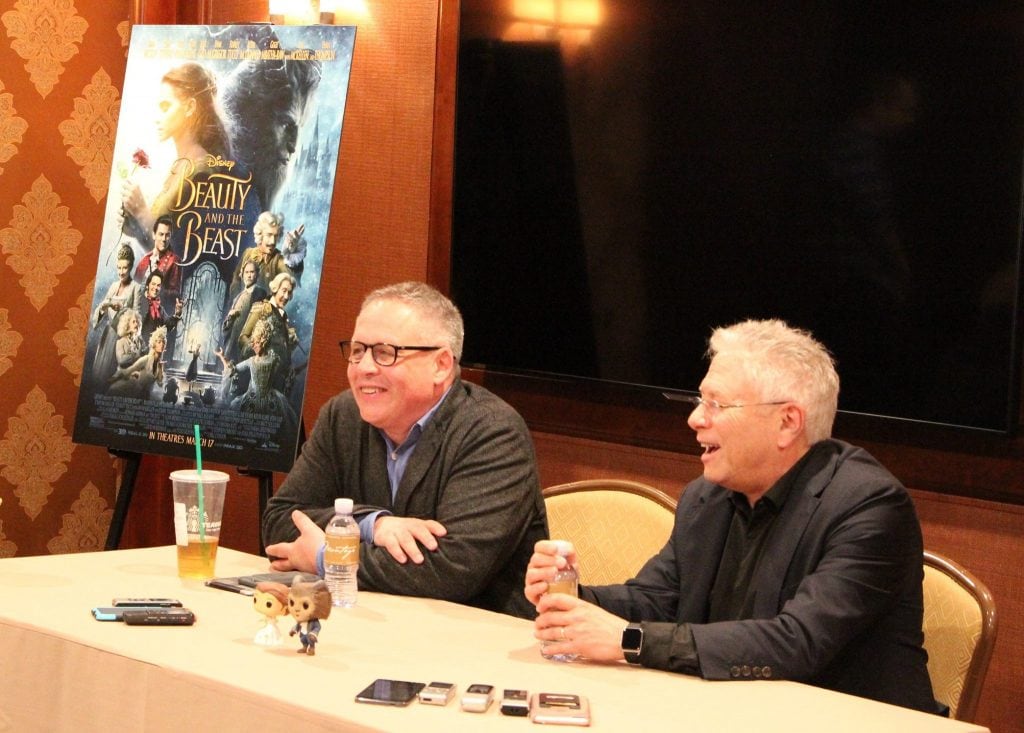 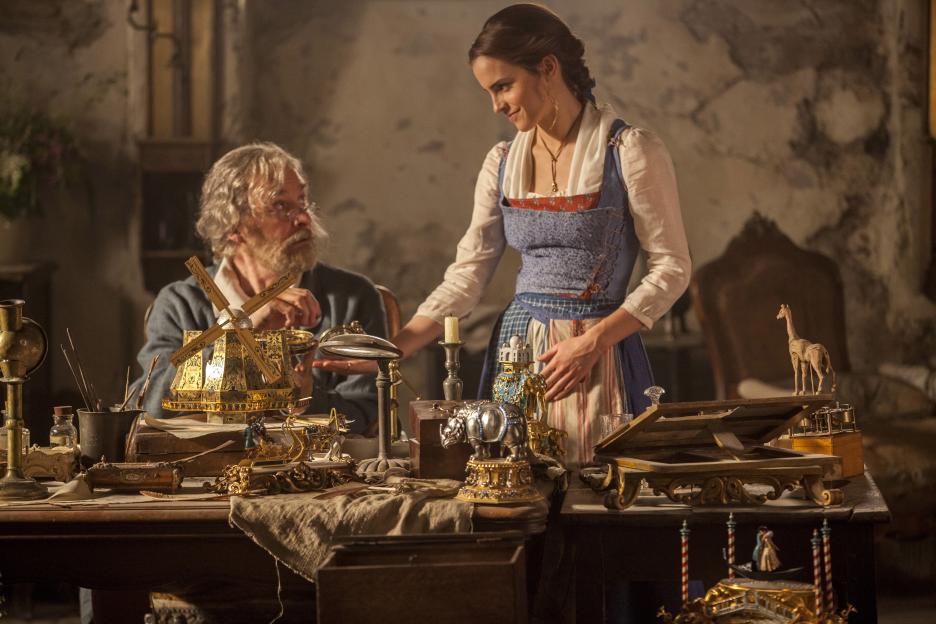 Bill also let us know a little bit about how he know that Emma was his Belle. Of course, singing was the number one concern for everyone. Even Alan chimed into the discussion.

Bill: Well I suspected it right, you know, just seeing her in, you know, in Harry Potter. It seemed like that was a perfect kind of connection to a 21st century Belle. Then we met. I was shooting a movie called Mr. Holmes. We met for an hour and the thing that I loved was how much she loved the original movie and how much she wanted to play the part and she came with a whole pile of books, you know, because I was late, you know, because I was shooting and she was in the middle of reading, you know, so there she was, you know. And then the only question really became she’s never, uh, sung professionally before. She needed to answer that question for herself too. She wanted to go off.

It was Christmas holiday and she said, you know, you go out and get a script together you can send me. We made a handshake deal and Emma’s gonna go off and make a tape and explore her voice, you know, and that was the thing, you know, that kind of scary moment. To me it’s more intimate than taking your clothes when you first hear somebody sing even in a karaoke session. You know, it’s like oh, my god, that’s the sound that comes out of you. You know, we’ve seen that a few time in movies too but, but, for her the voice, her voice is so much — it’s so much a continuation of who she is and how she speaks and there was clearly this kind of sweetness to it and clarity to it that made it seem like it was gonna be a different Belle but I was gonna be a really satisfying one.

Alan: She was a little terrified. I mean no bones about it and we made sure she had her vocal coach.  I had Michael Kosarin, my musical director. Bill was actually at the sessions. This is not necessarily it always is but it’s so helpful because she was I think really intimidated by me. I don’t know why. Possibly because of me being the composer I don’t think she wanted to be that vulnerable in front of me so I really hung back, you know, in the control room and in the back of the control room. And we also had a guy named Matt Sullivan who is a music supervisor and just gave, had to give Emma the space to just find her voice and work on it and work on it and she did and Dan was similar. He also was, you know, it was new for both of them. 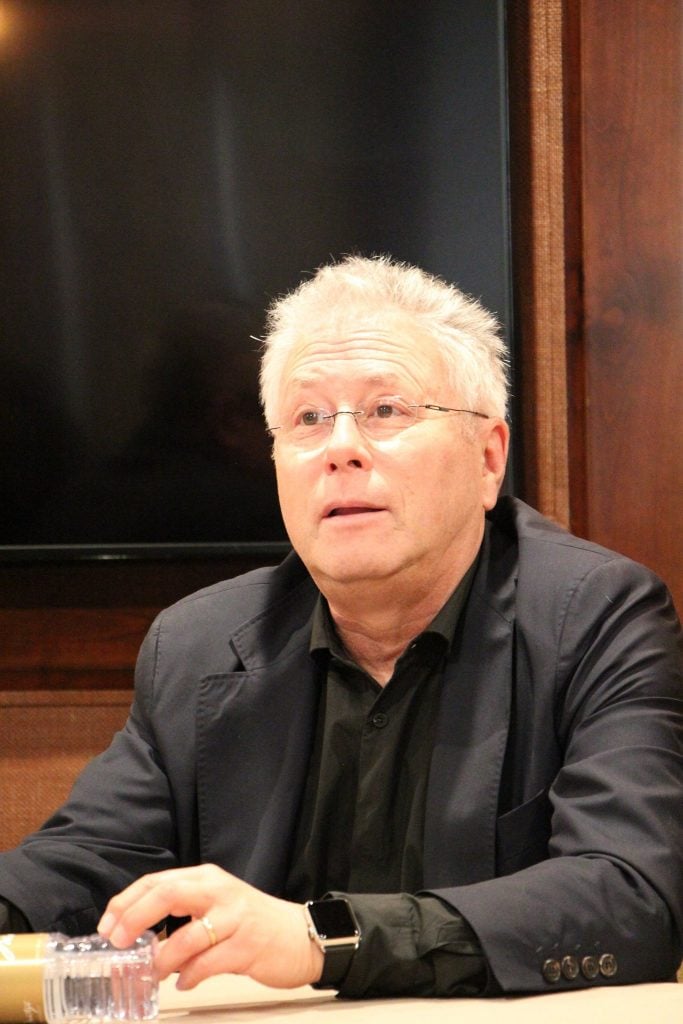 We were talking to Hollywood greats. Someone asked a great question – if Alan could go back in time and tell his old self something, what would it be?

Alan: Well, it’s just stuff I’ve learned. I mean one of the most important things I learned in my career was it’s not about me. It’s about the characters and the story and don’t ever fall in love with your own material. Let other people fall in love with it if they want and if you have a note, the best way to address a note is to go okay, and just do it because you’re part of a thing that’s larger than you and the more, that’s what’s great about musical theater also.

The more that you’re recognizing that you’re part is bigger than you and you are a part of that and just stay in the process that you can survive. I mean the most tragic thing and you can see this too is people who go I wrote this wonderful music. I don’t know why it wasn’t a hit. I gotta try. I gotta keep working. I don’t understand why they didn’t like it. It’s just tragic. Don’t try it out. Push it aside and go on to something else. Write another musical and another and another. Just move on and don’t get stuck, you know, being the nurse mate to your own material. 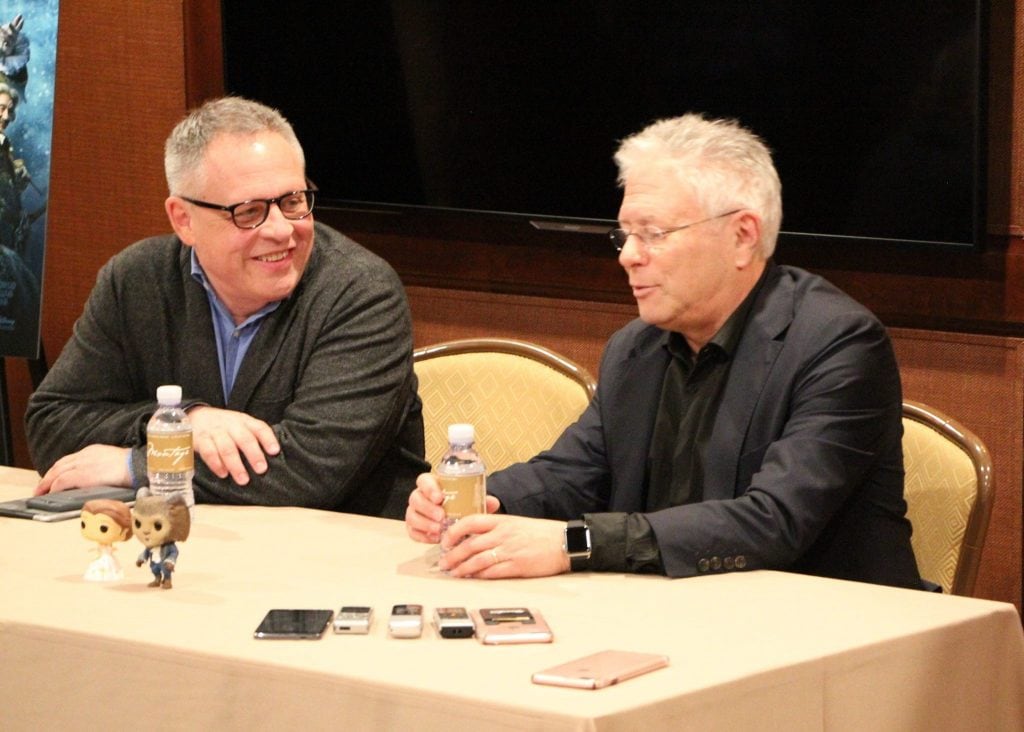 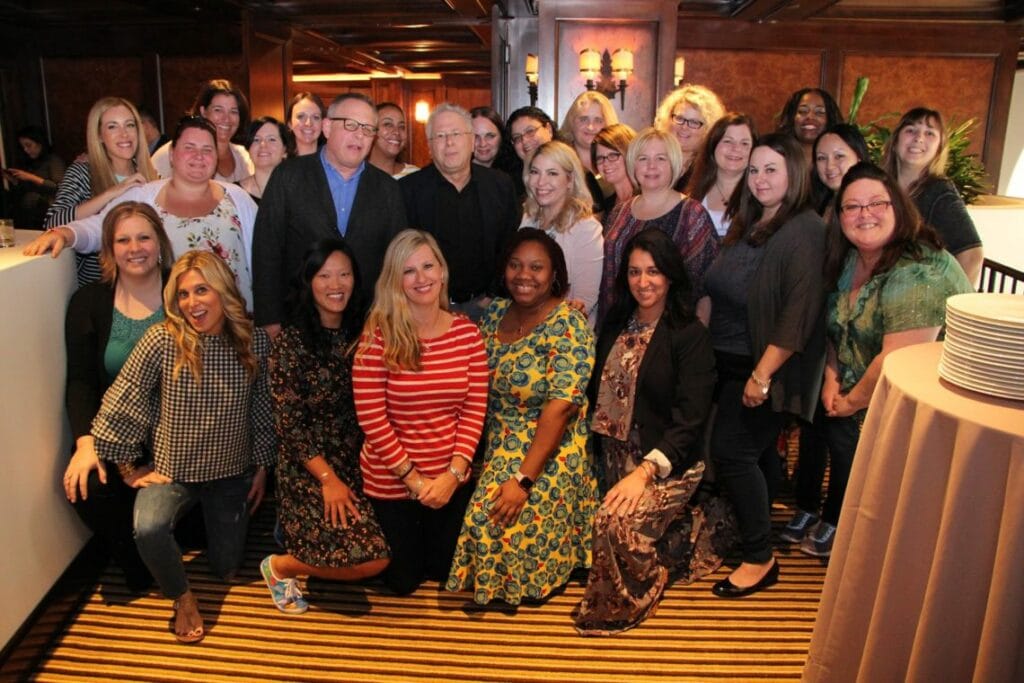 Beauty and the Beast is now open and in theatres!! Get out today and see it!!

*Disney invited me to interview the cast and crew of Beauty and the Beast. All opinions are my own. Travel and accommodations were provided.