Regardless of which side of the fence you voted on during this years presidential election I’m sure one thing we can all agree on is that what truly makes America great in fact is the everyday heroes among us. Flying out to Florida to visit the Kennedy Space Center less than 48 hours after the election only had me even more excited to be among the selfless and courageous astronauts  who were being honored at the opening of the Heroes and Legends exhibit featuring the U.S Astronaut Hall of Fame presented by Boeing. When you reflect back on the space journey’s these men and women faced it’s awe inspiring to know that despite impending dangers they accepted each mission knowing that their individual and collaborative efforts would benefit all of mankind. 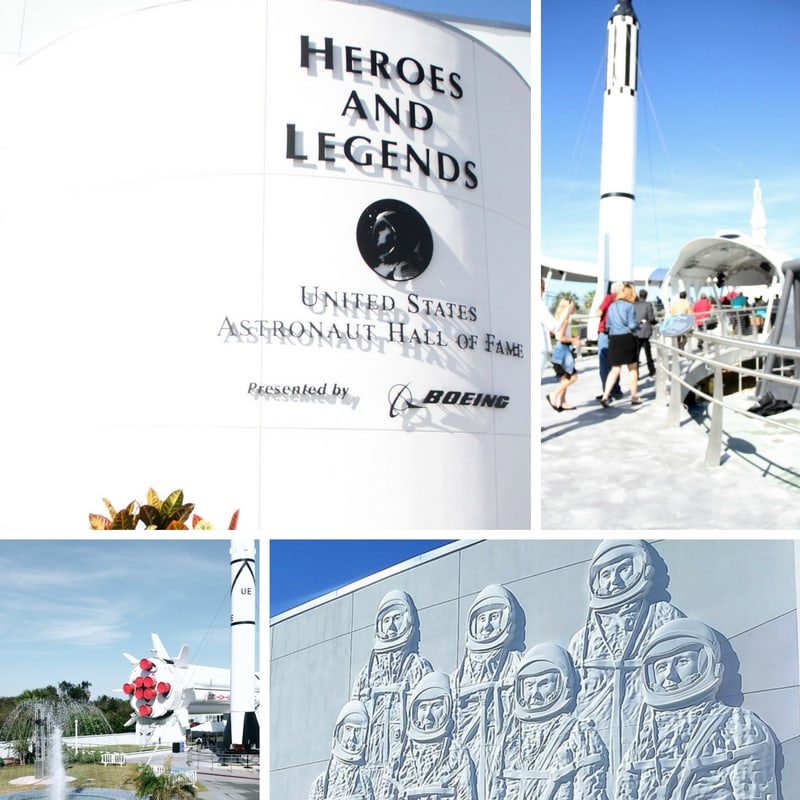 Day one of our trip consisted of a media preview of the Heroes and Legends Exhibit before it’s grand opening on Veterans Day where we were joined by a few  of the American astronauts who served.  As soon as you’re greeted and step foot through the entrance gates you know instantly that you are in store for something truly special as you look off into the distance where the Rocket Garden {you will find the first rocket to break free from gravity}  towers above you. With a slight turn to your left you’ll lay eyes on a stunning 30 foot tall by 40 foot wide, digitally carved bas relief {sculpture} that rendered the faces of the legendary Mercury 7 who were apart of the first national human spaceflight program, initiated in 1958.

We were guided in excitement up a dramatically, long winding ramp that lead to the entrance of the attraction and were handed a pair of 4D glasses which heightened everyone’s anticipation. I can imagine that in no way could we all have envisioned just the level of historic, scientific amazingness that was displayed for our wonderment inside. As we make our way into the very first room we all headed over to get an up close look at a cool collection of scale model NASA rockets from Mercury Redstone to Apollo Saturn V.

When asked to define what it means to be a HERO what comes to mind for you? As you walk into the extraordinary 360-degree discovery bay visitors will get the chance to contemplate how society defines heroism, and naturally the responses were as varied as the ages and backgrounds of the  people that answered.  A video played with candid responses on who were the heroes in their lives: Ironman, my teacher, my mom – each answer so genuine and thoughtful. 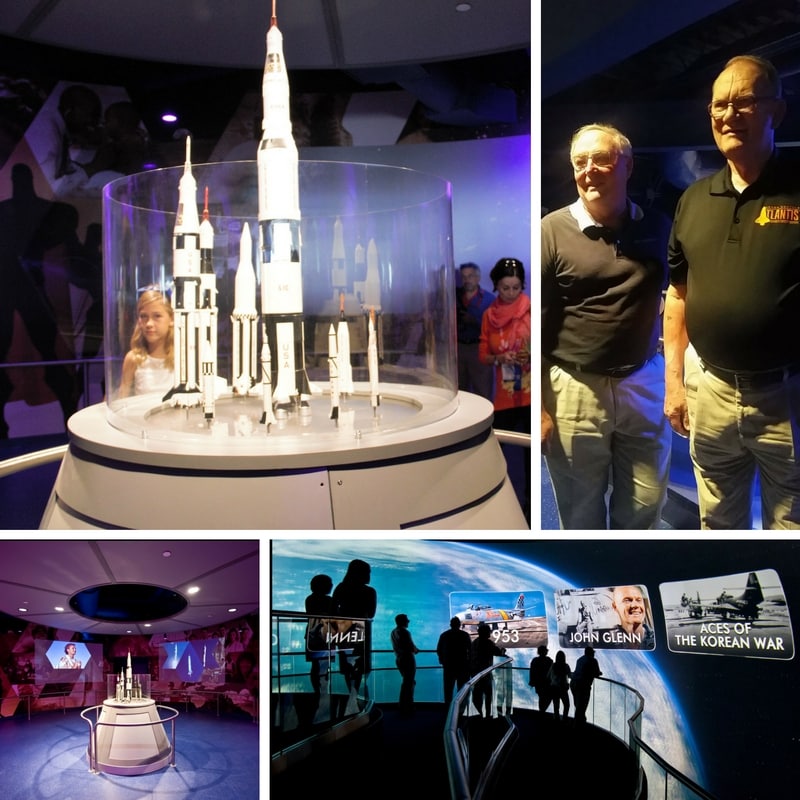 The next stop on our journey was to view the 6K resolution footage within “Through the eyes of a hero” in the theater which was a multi sensory experience like no other. At one point I felt like we were taking off on a space adventure alongside these explorers because the sound effects and imagery made you feel like you were deeply immersed into the moments. There was even  a rapid gust of wind blowing within the room that had me feeling like we were about to blast off too! It was amazing to watch the stories of four astronauts – Alan Shepard, Neil Armstrong, John Glenn and Jim Lovell unfold before our eyes. 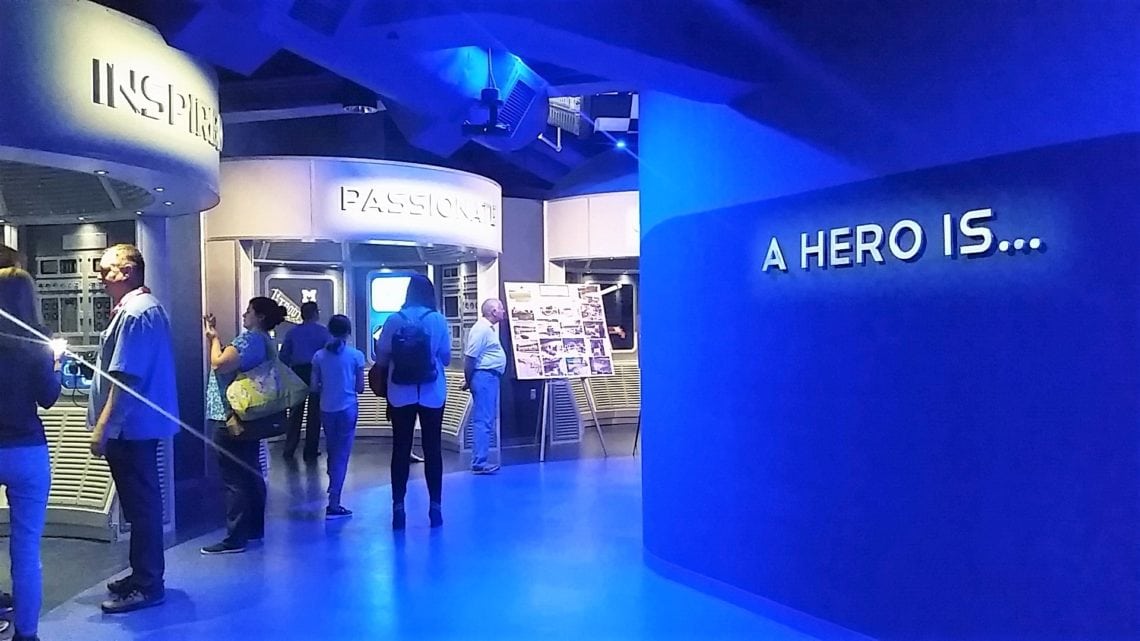 Our third experience was the “A Hero is” exhibit which was my absolute favorite, I literally wandered through it slower than most because I didn’t want to miss anything, aside from writing this piece I knew I had my boys to report back to. It was realized that despite everyone’s journey being unique with it’s own sets of highs and lows there are nine qualities that have attributed to the true definition of heroism . 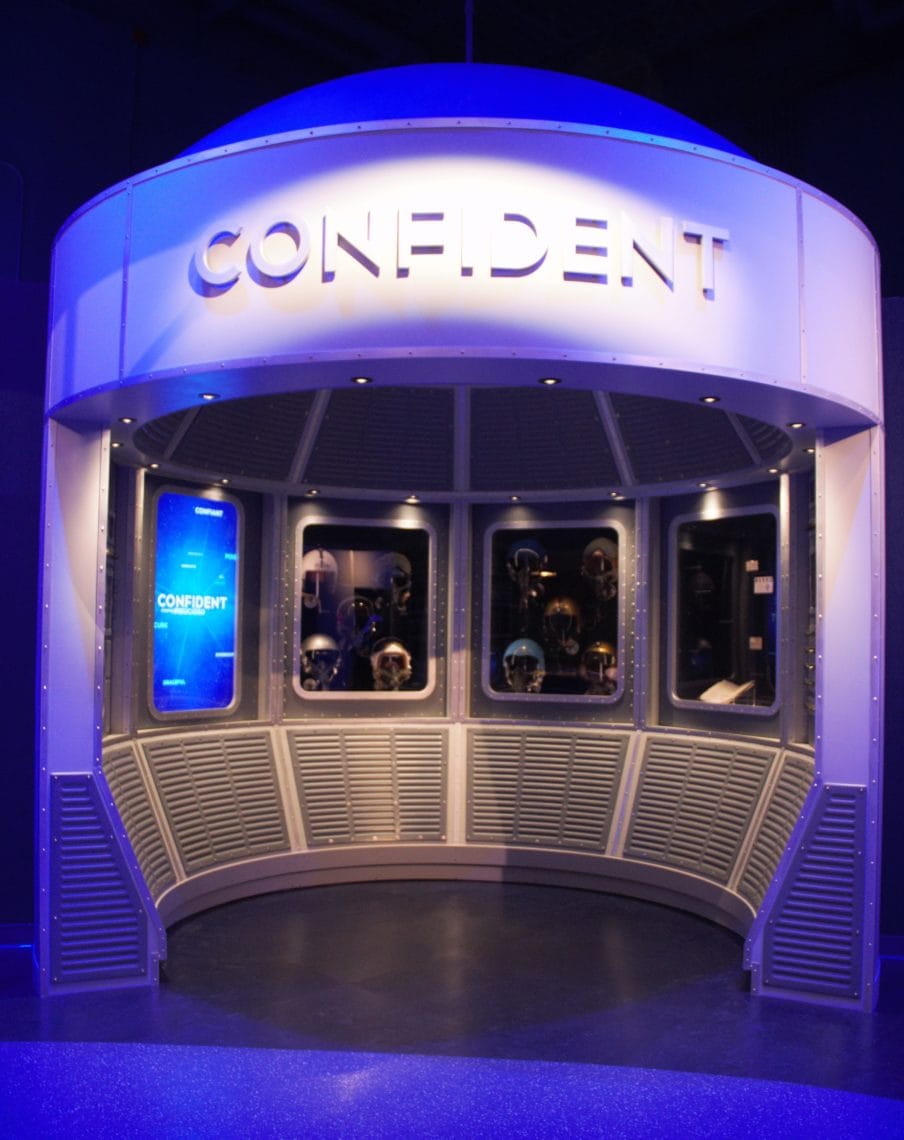 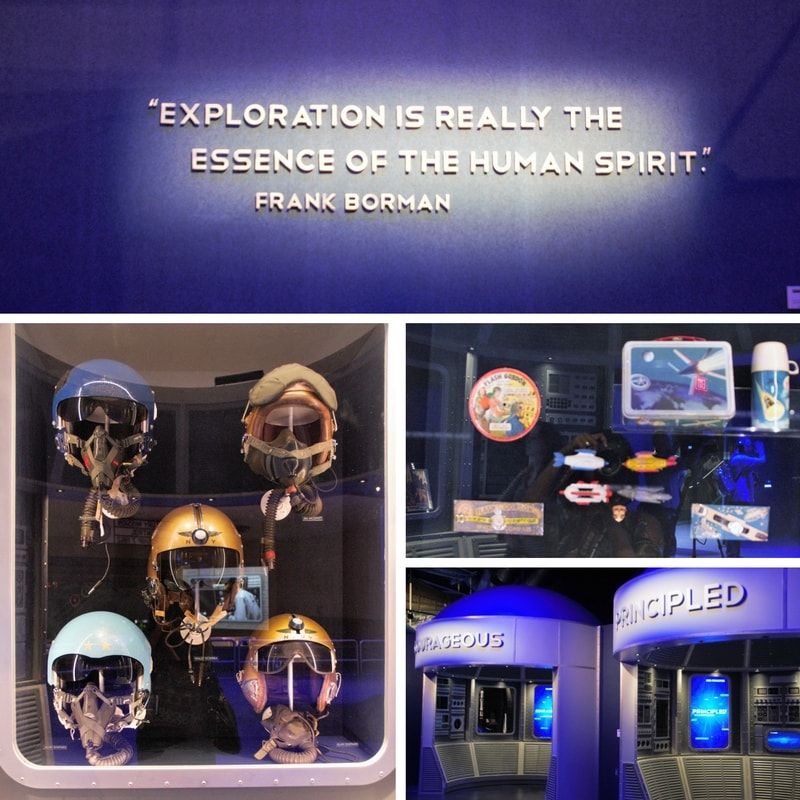 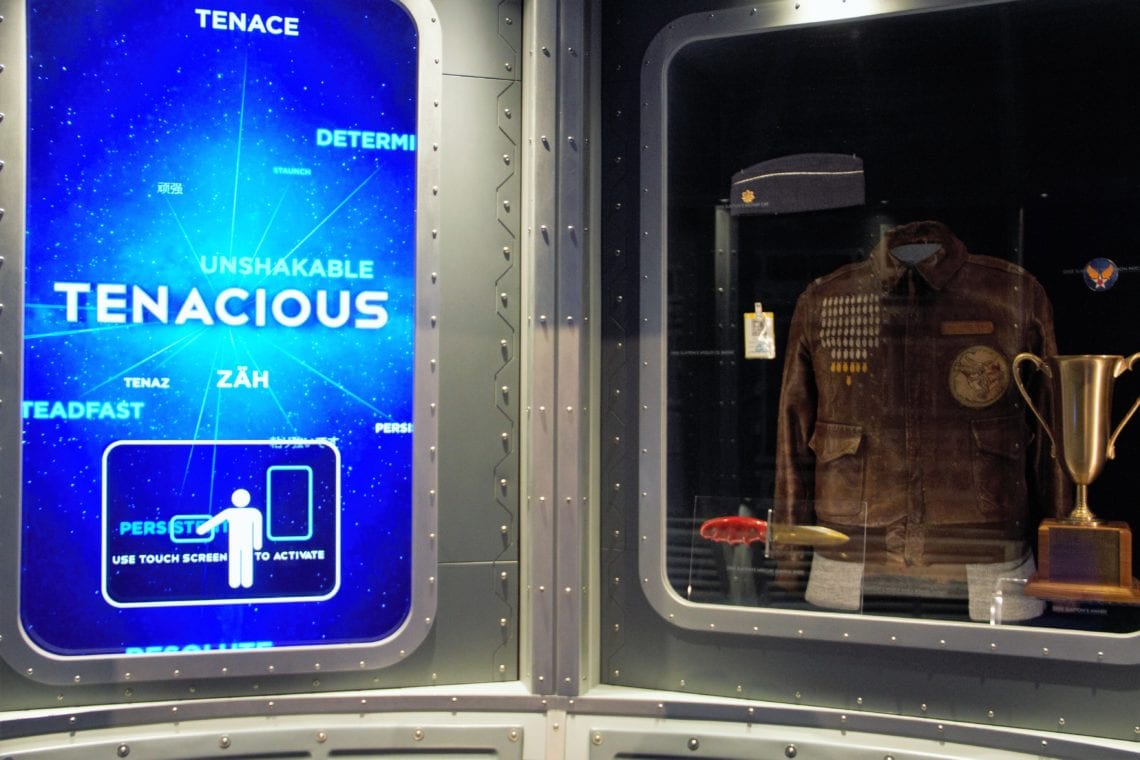 The interactive exhibit highlighted these key attributes with a module for named after each one: Courageous,  Inspired, Curious,  Passionate, Tenacious, Disciplined, Confident, Principled and Selfless  that showcases the actual experiences of NASA astronauts with periodic memorabilia and takes you on a trip through time. 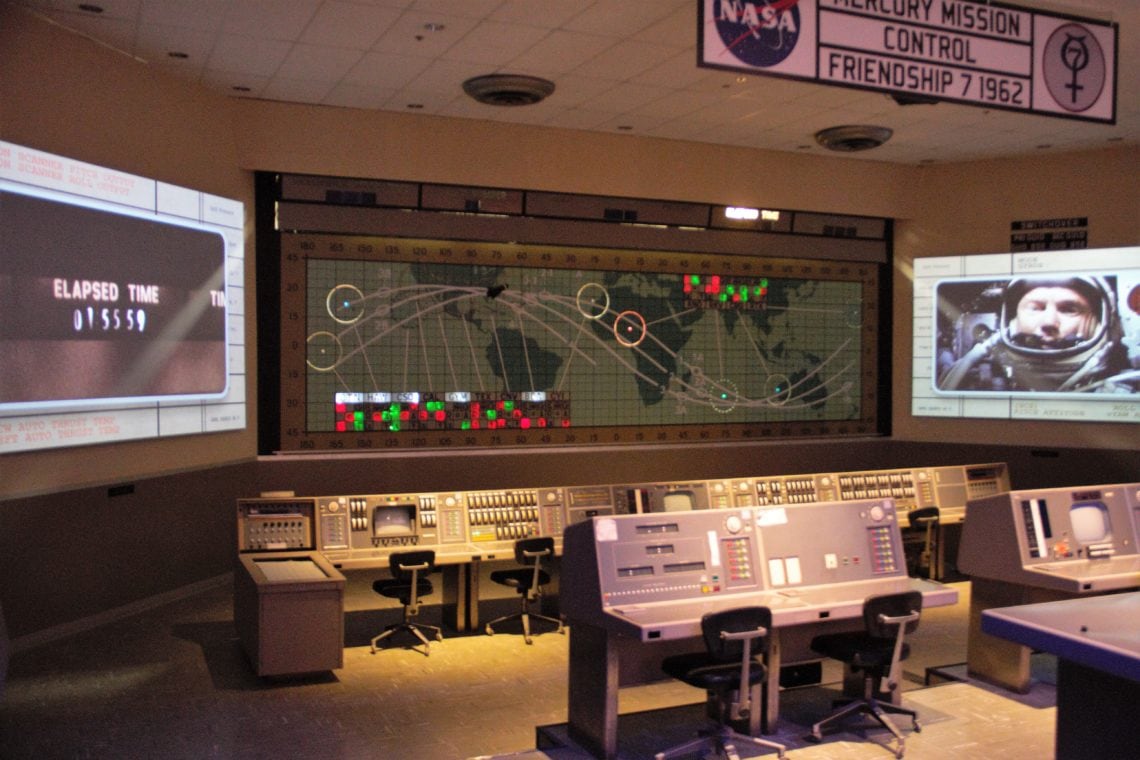 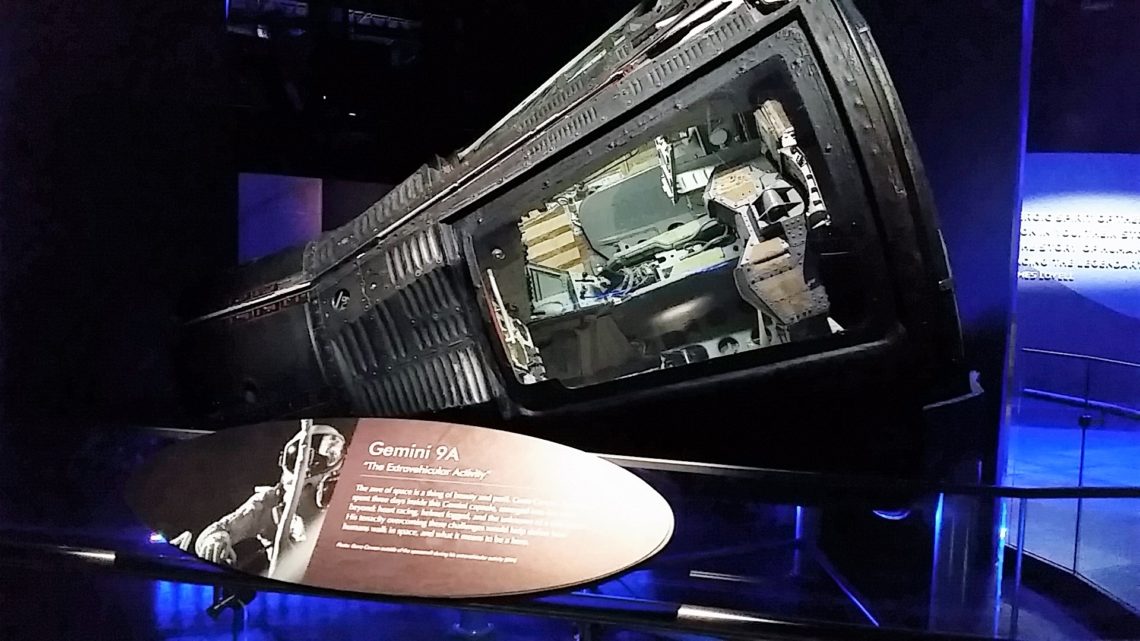 Other highlights that enhanced the experience include exploration of the original Mercury Mission Control room consoles and a Gemini IX capsule.

Alan Shepard became the first American to fly into space and the only Mercury astronaut to step foot on the moon as the commander of the Apollo 14 mission, so it’s no wonder that a bronze sculpture of him welcomes guests into the United States Astronaut Hall of Fame. What does it take to be chosen as an inductee? The astronaut 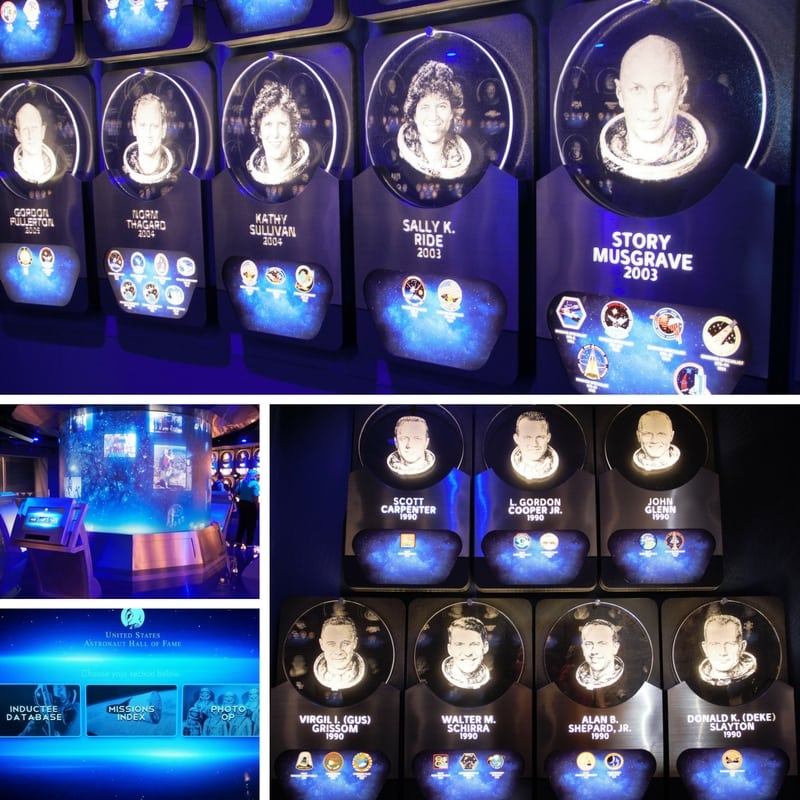 It was such a dignified and beautiful space to walk through as we moved past each of the nearly 100 inductees faces etched on circular glass displays. A stand out, fun feature of the hall is the opportunity to jump in a life-size photo with your favorite heroes and legends for an out of this world selfie! 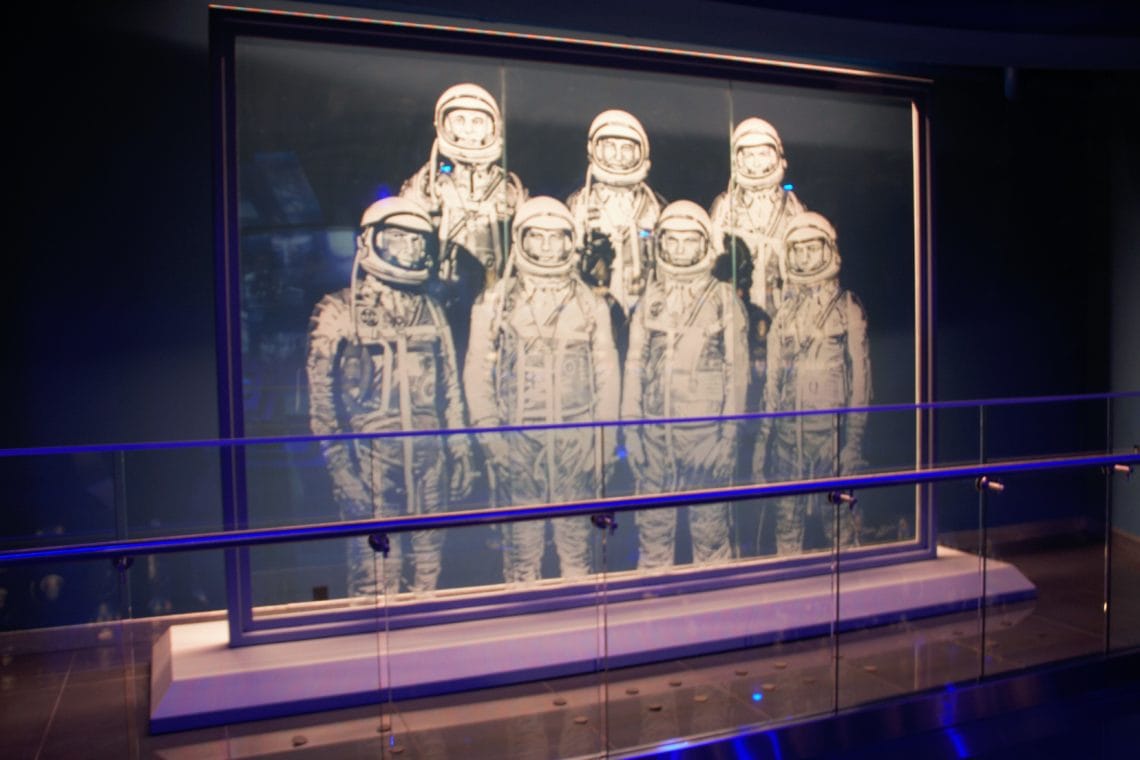 After nearly two hours in the truly impressive exhibit, I know I could have admired each piece of memorabilia and scrolled through every interactive screen that shared such in depth stories of the 93 astronauts a little longer. The only reason I’d actually left the exhibit was because we were scheduled to do other activities but guests could easily get caught up in everything there is to see. Upon completion of both Heroes and Legends and the U.S Astronaut Hall of Fame visitors will leave with a deeper understanding & greater appreciation and level of respect for the heroic men and women who represent NASA’s pioneering astronauts, and the next generation will surely leave inspired to dream bigger and to reach for the stars!

*The Kennedy Space Center provided travel accommodations. All opinions expressed are my own