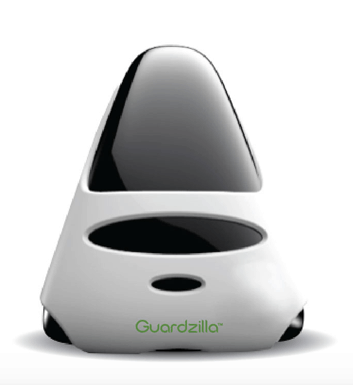 Every 14 seconds in the United States a home is broken into1 and while ninety percent of burglars look to avoid homes with security systems2, an overwhelming number of American households lack a home security system, mostly due to budget constraints. Enter Guardzilla – an innovative smartphone-compatible security system that is revolutionizing the home security marketplace with a price point of less than $100. Previewed to rave reviews at the Consumer Electronics Show (CES) in Las Vegas on January 5, 2015 and now officially launched at Best Buy stores nationwide, Guardzilla brings a new form of personalized security to the masses. The unit not only generates a siren alarm and streams video in real-time, but it also captures photos that are sent directly to the users’ smartphone.

Guardzilla comes in a modern, discreet design and is user-friendly, with a quick, easy-to-follow installation process and customizable settings based on the users’ preference alert notifications (via text, email and push notification). The security system connects to the users’ smartphone, providing high-resolution photos of intrusions when there is movement in unauthorized areas. Additionally, the system can connect to more than one smartphone, allowing multiple home-dwellers to stay connected – and protected – at all times.

“We are launching Guardzilla in a time when Americans are gravitating towards this ‘connected home’ mentality and simplifying and controlling their world from virtually anywhere via their smartphones. We see this in products that adjust home heating/cooling systems, turn on/off lights, open door locks from virtually anywhere – and now, protecting homes, offices, apartments, and more with Guardzilla,” said Ted Siebenman, CEO and President of Guardzilla. “At less than $100,Guardzilla gives users flexibility and given its size and mobility it can serve multiple uses, including baby monitors, NannyCams and boat and RV monitoring, allowing more Americans to protect what is important to them.”

To introduce the product to Americans in a fun and unique way, Guardzilla is launching a “Caught in the Act Challenge” in February 2015. The contest will be hosted on Guardzilla’s Facebook page and will encourage fans to upload photos of things that they have caught on their Guardzilla or smartphone – ranging from home security, children sneaking snacks or TV time, teenagers “missing” curfew and more.

For more information about Guardzilla:

You can purchase your own at Best Buy.