Finally Got Around To Watching ‘Paper Heart’ 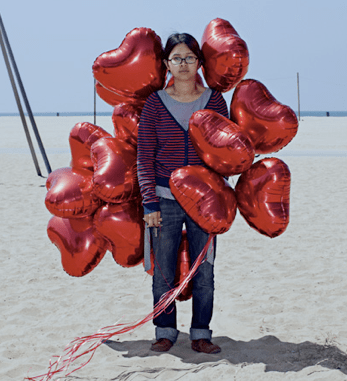 Yes, I am talking about a movie that came out in 2009, but I really liked it and woke up wanting to write about it. Bill had paddle tennis last night which always gives me an evening of complete relaxation. I can watch whatever I want which is awesome because sometimes my choice of programing makes my husband want to smash his head into a wall.

So, as I was flipping through the channels trying to see which alien or Egyptian or nature show I would settle on, I saw ‘Paper Heart’ was about to begin. The documentary was released a few years back but I remembered wanting to check it out – so I did.

By writing this post, I’m essentially going to ruin the movie for you – so let’s say this. If you haven’t seen it, please stop reading here and just go and see it. Then come back to read the rest. Otherwise, keep going. 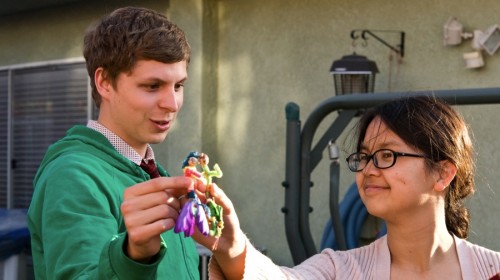 The movie is filmed as a documentary. We follow around this quirky girl try to find out if love truly exists. She doesn’t  believe she will ever feel or find love and this is her way to either comes to terms with that or learn something new about herself. Charlyne Yi is adorable! Think shy / never been kissed / super artistic / deep seeded goodness.

Along the way she meets Michael Cera – an actor I LOVE to DEATH. The documentary follows the BLOOMING of their innocent love.  He courts. They date. It gets a bit serious. He stops liking the cameras following them. She won’t say she loves him. He calls it quits. She’s devastated but still won’t admit she loves him. The film eventually ends where she goes to see him and asks the cameras to stay out of their re-connect.

The movie ended and I was filled with…. JOY. I LOVED the story. I LOVED the concept. I loved certain scenes of people they interviewed (some of which made me cry). It was really put together in such a wonderful way. I went to sleep believing that Michael and Charlyne got together. They did it! She found love! What a great story.

I woke up and started to work and thought to check to see if it was real. It just seemed so real and the term documentary is attached. So, I look it up and there are stories everywhere about how it’s not true. They never dated and it was just for the movie.

I’m very gullible. Believe me. I thought ‘The Fourth Kind’ was a true story and couldn’t sleep for days. LOL!

So, I was a little sad that the two didn’t actually end up together because they really seem like they would hit it off. BUT what makes a good movie is getting the viewer to become invested in the characters, and I really was.  I think I enjoyed the movie so much because I believed what I was watching actually was happening to these two people. I guess that’s what makes reality shows so appealing. Except this was reality tv without the drunken stupor or the excessive violence. It was feel good tv.

Am I sad that these two didn’t hit it off in real life? Not for me – I still had a good time watching the film thinking it was really happening. I’m sad for Michael and Charlyne that they didn’t actually give it a shot. They seemed like the perfect fit. 🙂

It’s not a blockbuster, money guzzling pirate adventure. So, don’t expect that. If you are looking for a great movie to watch (alone of with a loved one), give this very old one a try. 🙂