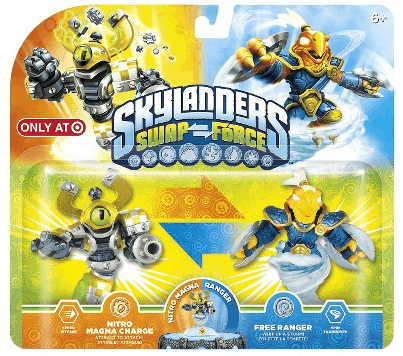 You know that the Sweeney house is a gaming house and that we absolutely love Skylanders (and by we, you know I include myself in that)! My son Liam especially loves playing the game series because he gets an action video game as well as action figure play. It’s the best of both worlds. I mean, we’ve even had a game truck at our house!

Here’s a little bit of info:

Embark on an exciting new adventure with the Skylanders and the SWAP Force. For generations, the SWAP Force protected the volcano that replenishes Skylands’ magic. That is until an epic battle caught them in an eruption that blasted them apart, sent them to Earth and gave them the ability to swap powers. Only you can mix and match their tops and bottoms, put them on the new Portal of Power™ and save Skylands.

You can purchase this two pack ONLY at Target.com or in Target stores, exclusively for only $29.99!! Skylanders’ Swap Force Starter Pack sold separately.