Emma Watson And Dan Stevens From Beauty And The Beast: Exclusive Interview #BeOurGuestEvent 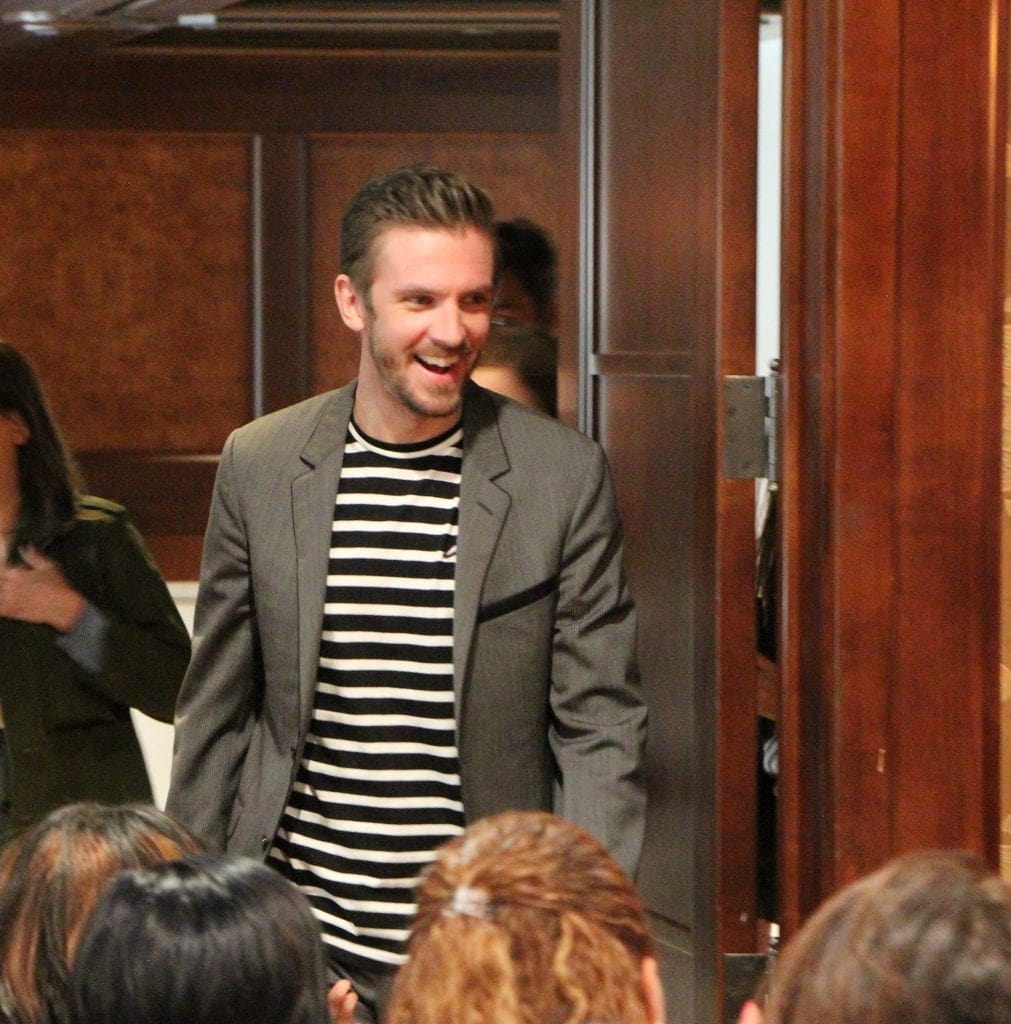 We had a lot of fun interviewing Emma Watson and Dan Stevens. They were both such a PLEASURE to chat with because you could feel the love they had for the Beauty and the Beast legacy. To step into such a role is a true honor and it did not escape either actor. I’ve been a fan of Dan (hey, that rhymes) since his days on Downtown Abby, so it was really fun to get to chat with him and see his personality first hand. Emma, as I knew she would be, was perfection. A true example of what everyone in Hollywood should strive to hit. Grace. Mission. Love. Passion. Intelligence. Commitment for more. She is on a journey and I am happy to watch her soar.

I’ve pulled some of my favorite quotes from our conversation. I want to start off with the question that everyone has on top of their mind – the SINGING!!! How did the two of them get ready for that part of the role?! We know that these two were not professionally trained, but yet they knocked it out of the park.

This was actually a main part of their audition process: 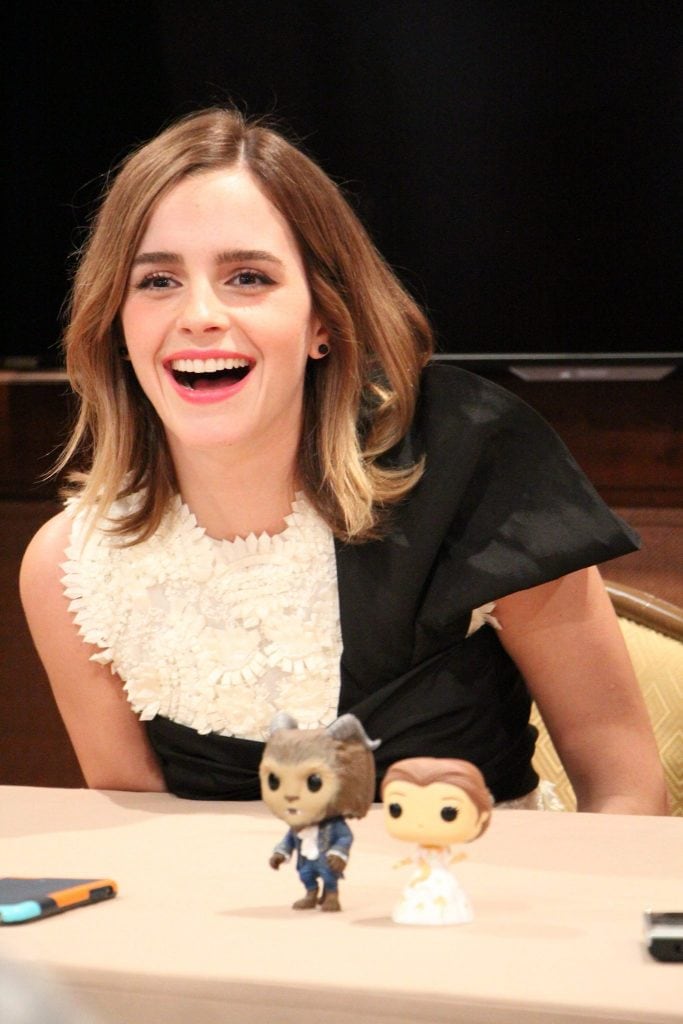 Emma: Disney wanted to explore whether or not I could sing.  I think, really, that was, that was the major question mark. So I was asked for an audition tape and I went away and I did one. Then I kind of did that classic thing of waiting on tenterhooks to get the call and to hear whether or not it was up to standard. Thankfully it was. So I got offered the role which was just very, very exciting, really.

Dan: I put a song on tape for Bill Condon, and I say the Beast song from the Broadway musical which we end up not using in the movie. Because the Beast doesn’t sing in the animated film, of course. I mean, the same thing.  Fortunately, he liked it. 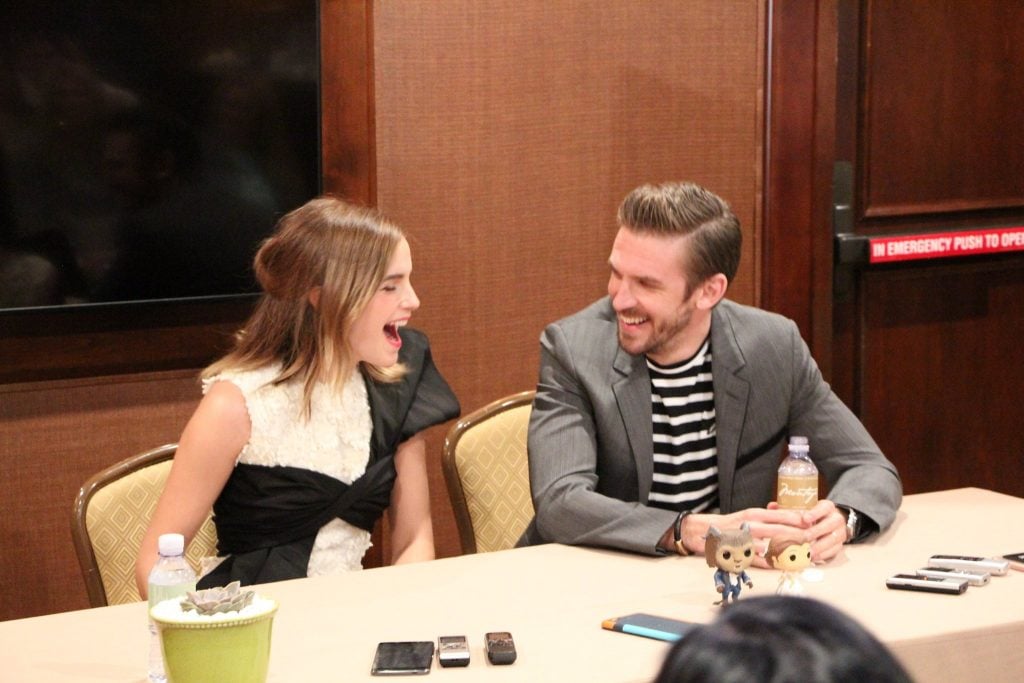 In case you were wondering, that Beast is a whole lot of CGI. There were some people that were confused by that all. But Dan had to get into an oversized suit and actually wear stilts at times to shoot scenes. So, he wasn’t entirely in the clear.

Dan: I didn’t really have a costume.  Well, I did have a costume.  The made costumes for the Beast.  They were really giant coats that he wore and this massive shredded cloak, but I never actually got to put it on. II spent the whole time, as the Beast, anyway, in a forty pound muscle suit on stilts covered in gray lycra.  So I looked pretty odd, but nothing like the Beast that you see in the movie.

It was motion capture puppeteering of the suit.  I’m inside a giant muscle suit on stilts, so the Beast’s body was, was me moving inside there.  The facial capture was done separately, and every two weeks, we’d go- I’d go into this booth, and ten thousand UV dots would be sprayed on my face, and twenty-seven little cameras would capture everything I’ve been doing for the past two weeks just with my face.  So it was my face driving that Beast’s face and, and they turned that information digitally into the Beast’s face and map it onto the body that I’d been working on the set.

Lots of CGI with me driving it all. It’s an amazing new technology that’s never been used this extensively before, and it’s very, very exciting. 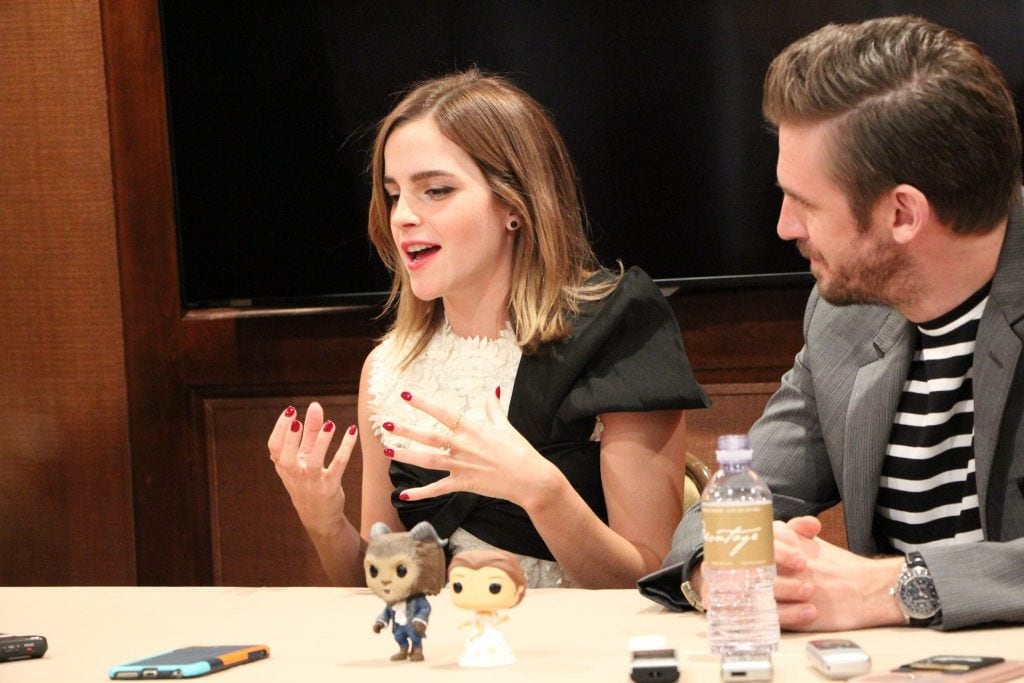 Emma loved the fact that she was able to continue to act while playing empowering females that can inspire future generations to come. Belle isn’t your typical princess… in fact, she isn’t a princess at all.

Emma: There was talk of a wedding perhaps at the end and that had not been in the original. I was sort of like, “oh, me, sorry! Can I just point out this isn’t in the original?”  We need to stay, we need to stay faithful to the original, and I really, and I felt strongly about that.  I also felt very strongly that she needed to have a vocation to fill her time with.

So we kind of co-opted what was originally kind of crazy ole Maurice’s identity, and I was like, well, that’s not the direction that Kevin’s taking the role in.  Could I co-opt that for Belle? We had her design this washing machine that allows her to have more time to read and to teach.  That was super important to me.

People ask me a lot – what’s it like being a Disney princess?  Well, actually, Belle isn’t a princess, [LAUGHS].

She’s actually one of the few Disney that’s in, you know, in that line of, of young women who actually isn’t a princess.  She’s an ordinary girl from an ordinary village and, and I actually that’s very important about her. She has no aspirations to be a princess.  She has no aspirations to marry a prince.  So there was a line in the movie, originally, about Audra, the chest of drawers says to me, oh you know, we’ll make you a gown fit for a princess.” I asked Bill if we could say, “I’m not a princess?” And he agreed.

So, just like little things like that where I just felt like I was protecting and defending Belle’s sort of original DNA and just making sure that we stay truthful and, and faithful to this very independent young woman. 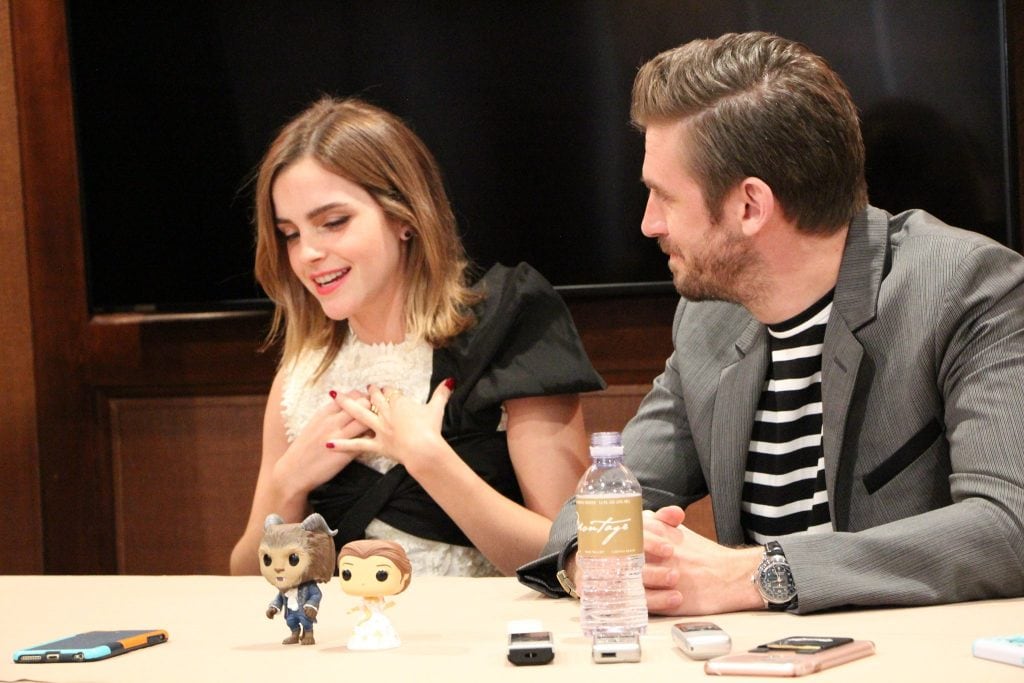 Oddly enough, every moment she references stood out for me as I previewed the film. They truly did. There is a scene – maybe 10 seconds or so – when Belle sits and teaches a little girl to read in the film and the village people look down on her efforts. It boiled my blood because that was REAL LIFE. That was how it WAS and in some cases, even though we have come a very long way, this thought that women should be less than men is still alive and well in society. I’m not going to say “some” society. I’m just going to say society because it is a universal belief that is still being fought. So, I was so thankful that the scene was placed because it was a seed. A little girl will see Belle teaching a child to read and she will note that Belle finds reading important and that little girl is desperate for knowledge – as should all little girls be. It’s not all about the price and the pretty dresses.

I’m a Marvel girl. You know this. There’s a reason why I shy away from the princess-themed movies. Thank goodness Disney is shifting gears as we age. Growing up, Belle was the only princess that did the saving – so this was one of my favorite stories. One that I felt comfortable with. Not everyone needs a prince. You can WANT a prince… but you don’t NEED one. There’s a big difference. I WANT every prince. I am probably the most boy crazy person on the planet you’ll ever meet. Know this. But I don’t NEED any one of them and that is a MASSIVE difference that I need to teach my daughter. This story fits nicely with that theme. Love is powerful. Love is uplifting. Love is the base of all things. Love is everything. But love starts from within. 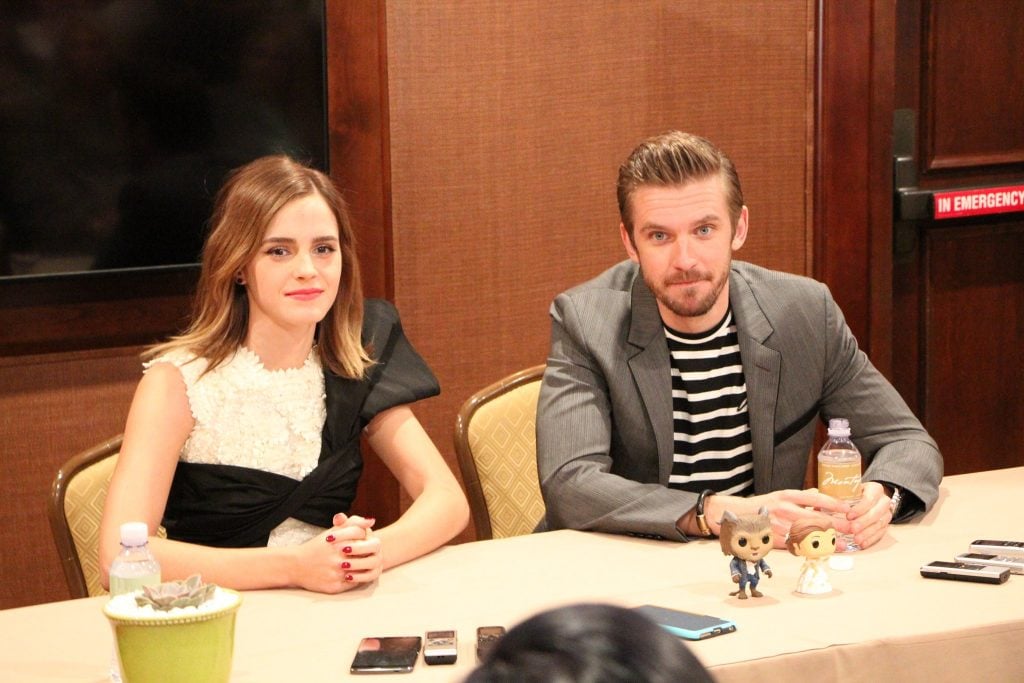 Belle is someone who doesn’t fit into her town – into her own little world.  Someone in the room asked if Emma had any advice for young girls who feel like they don’t fit in their tiny, little world.

Emma: I remember what was so torturous about school was that that is your whole world.  It’s like this microcosm. The people that are in your class – that’s your entire universe.  That is your planet, and if you don’t fit with that, with however many people are in your class, it’s miserable.

I think what my mom really said to me was, “Look, it might feel like the end of the world right now, that you don’t quite fit, but one day, you might be really grateful for that.  And it’s very hard to see at the time but it’s, you know, there’s a big, wide world out there with people who have diverse interests, and perspectives, and opinions.  And you, you kind of have to just like go out there and, and find your, find your tribe; find your kindred spirits; find, find the people that, that resonate with you and, and that you feel at home with.”

It takes a bit of persistence, and it doesn’t necessarily come overnight and really easily, but actually when I look back on not feeling like I fitted, actually, at school, I’m really grateful that I didn’t because I actually didn’t- don’t really particularly want to be like any of who were the cool girls in my, in my class anymore. I‘m glad that I was different.  I’m glad that I was a bit odd and I didn’t really fit in.  All of this is easy to say in retrospect, but anyway, I hope that’s, I hope that’s helpful. 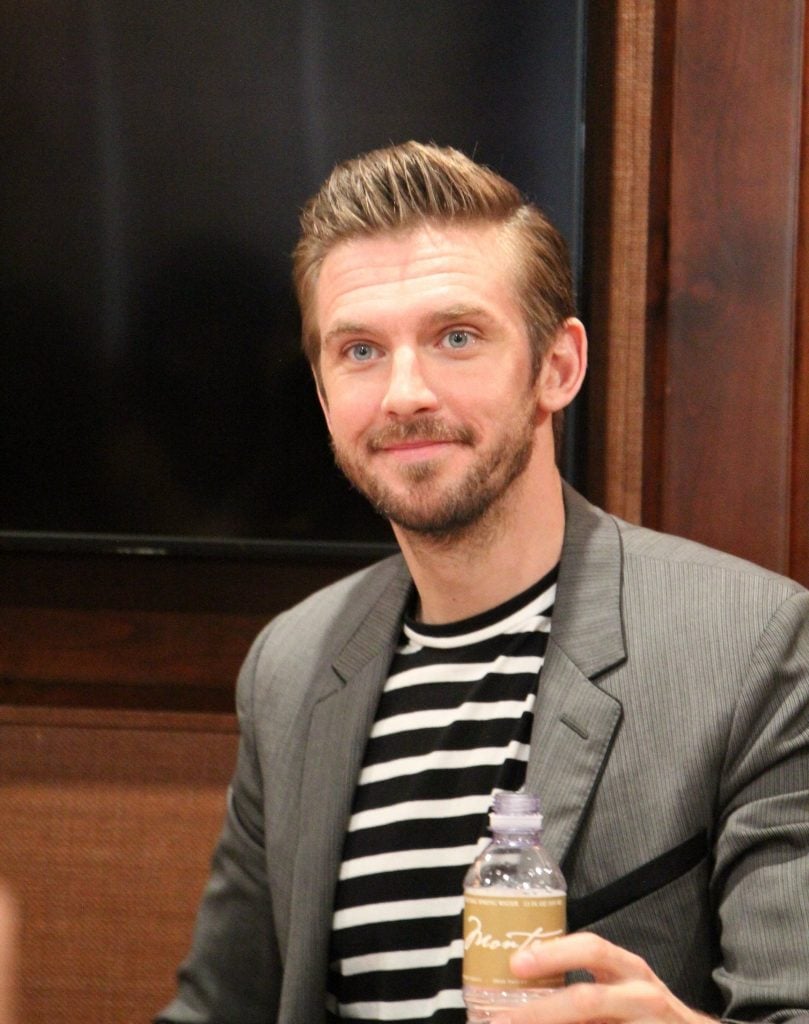 One last question before I wrap this post up — we had to ask them what they hoped people got out of this film. Their version of Beauty and the Beast will probably be the one that this new generation will see.

Dan:  I remember even for me, the animated film as being a Disney film that was immediately loved by boys and girls.  I actually have a great friend of mine who’s now in his mid-thirties.  He grew up in the west of England in the countryside, who for him, Belle was his greatest hero, and he used to go into the fields of Somerset and sing, “I want to venture in the great wide somewhere.”

There’s something about the spirit of Belle that is to be championed in all of us.  I think that curiosity, that imagination, that ability to see beneath the surface deep, but also to see beyond your immediate surroundings.  She has tremendous vision in all. I think that’s something to be applauded.

Emma:   I think as a child, I had a very hard time working out to why people weren’t kind to other people. I think what is so beautiful about Belle is that she’s so nonjudgmental.  It’s her ability to see beyond the surface of things and to understand that kind of everyone has a story. You don’t always know what that story is to kind of look deeper into things before you make a judgment.

There’s a kind of compassion and empathy there which I think is kind of a relief because I don’t think anyone is inherently evil.  I think there’s light and dark in everyone, and I think that she kind of- she symbolizes that very well. 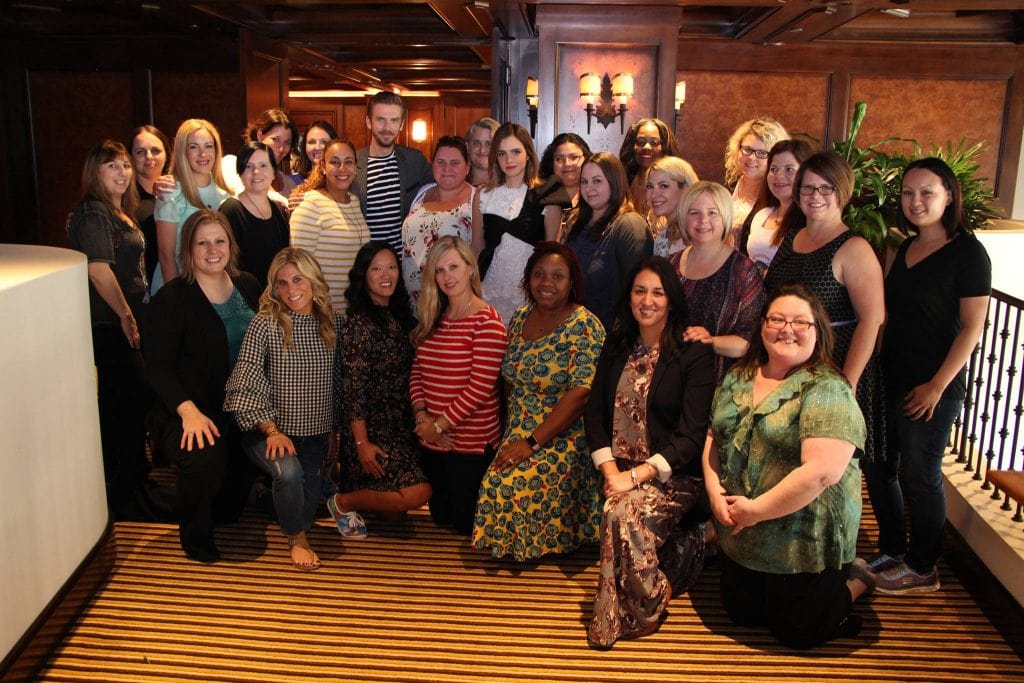 *Disney invited me out to California to interview the cast. Travel and accomodations were covered.