I have been fortunate to attend several press junkets for Lady and the Blog, but the press junket for Disney’s new animated film, Frozen, just may take the cake. Not only did the junket involve chatting with the star studded cast of Kristen Bell, Idina Menzel and Jonathan Groff, sensational directors Chris Buck and Jennifer Lee and songwriting and musical theater legends Kristen Anderson-Lopez and Robert Lopez, but Disney wanted to make sure that we were in the Frozen spirit with an amazing ice sculpture Olaf, sensational ice bars and a whirl around the ice skating rink. With fabulous ice everywhere you look, who’s going to miss the summer? 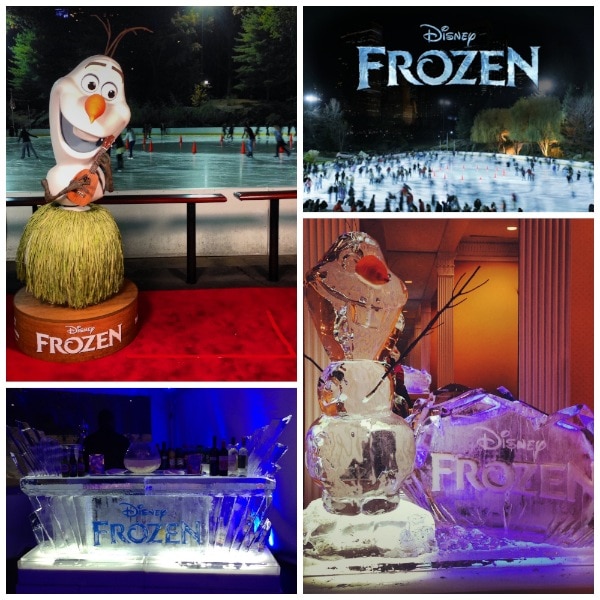 It’s no secret that Disney animators have taken animated films to the next level with their incredible skill and attention to detail, but I was amazing to learn all of the nuances and craft that went into making the characters and landscape of Frozen as realistic as possible. The snow and ice in Frozen is just as much a character in the story as Anna, Elsa, Kristoff and Oleg are and Disney animators worked tirelessly to make sure that the behavior of the ice and snow was as true to life as possible. Disney animators traveled all around the world studying snow and ice. From ice hotels in Canada to real snow-covered hills in the northwest, animators romped and played  in the snow to observing how different types of snow behaved and how people realistically move through the snow to make the characters’ interactions with the snow as true to life as possible. Disney animators (including the guys!) even donned long, full skirts like the character Anna wears to trudge through the snow to see how a character would realistically maneuver in that situation. Talk about dedication to your craft! The end result is a breathtakingly realistic tableau that amplifies and enhances an already fabulous story to make Frozen the must see movie for this holiday season.

Pictured below, the evolution of a character. From early sketches to the final result, Disney animators are dedicated to making the characters as dynamic and lifelike as possible. 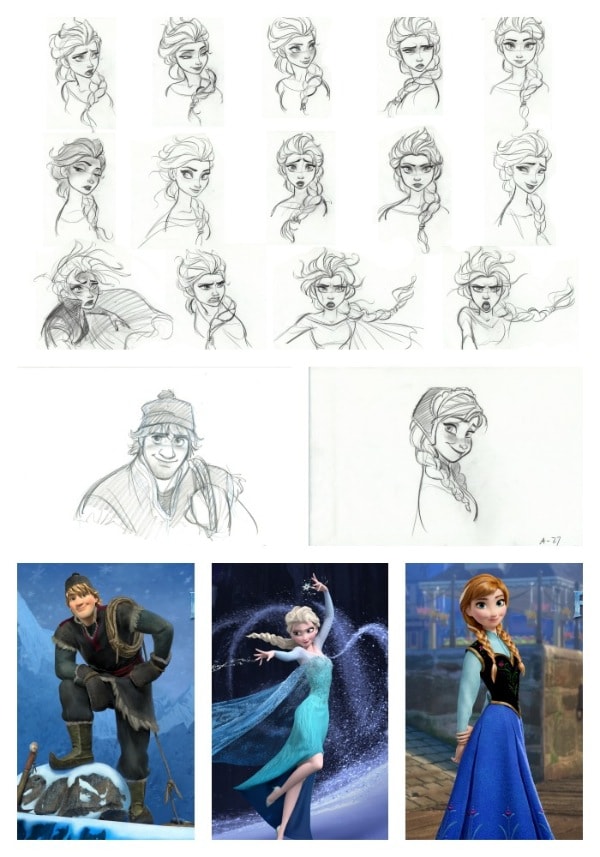 Directors Chris Buck (Tarzan) and Jennifer Lee (screenwriter, Wreck-it-Ralph) are two of the forces behind this phenomenal film. Here’s what went into the making of their masterpiece in their own words.

Chris Buck On what were the most challenging scenes to create for the film:

One of the, the sequences of building an ice palace, the Let It Go song, was quite a challenge to get the ice looking the, the correct way and not just correct, but as beautiful as it is.  It’s spectacular really, and they did a lot of research.  I brought in experts about ice and snow.  Technically, our challenge was creating snow that was believable.  We had the first snow we did look like stryofoam packing peanuts.  We knew it was wrong so we had to create new technology, new software.  One was called Matterhorn, and one was called Snow Batcher.  So things like that.  From a technical perspective, the ice and the snow were really kind of rough.

Jennifer Lee On what were the most challenging scenes to create for the film:

One frame of building that palace took 30 hours to render. It’s 24 frames a second, so if they were big, very complex. We had 50 lighting and effects artists just to do that one shot.  So it was a big, I think visually that was the greatest challenge.

Chris Buck On working with Josh Gad (Olaf the Snowman):

He’s just a funny, funny guy.  He came in for our very first table read, Josh did, and our casting director brought him in.  This was before he had done Book of Mormon or anything like that.  And he’s got this great personality.  He loves animation.  He loves doing this part, and it just, he, he does that innocent voice so well, you know. He’s so child-like, he’s a big kid.

Jennifer Lee On working with Josh Gad (Olaf the Snowman):

He has an optimism in his voice, I think, that Olaf has that you either just kind of have, or you don’t and he just has it.

No Disney movie would be complete without a memorable soundtrack, and Kristen Anderson-Lopez (Winnie the Pooh) and Tony® winner Robert Lopez (The Book of Mormon and Avenue Q) certainly deliver with their show-stopping original score.

Robert Lopez On how they got involved with Frozen:

We worked on Winnie the Pooh with Peter Del Vecho and there was something about our songwriting he must have liked so he brought us on.  All we really saw was a bunch of art and then there was one picture of the two girls playing together as kids.  And that immediately kind of hooked us in because we realized it would be a story about two separated sisters, two sisters who loved each other but were separated by fear and we having two girls of our own it just resonated with us through and through. As we worked on the story we held that [the sister’s relationship] as our true north for it.  That it was going to be about these sisters who were divided and came back together and one of the cool things about working with Chris [Buck] and Jen [Lee] who were just awesome was that they allowed us to be involved with actually shaping the story, not just through the songs but just sitting and meeting after meeting after meeting. And we really were involved in the story in a major story.

Robert Lopez On the evolution of the story:

The story changed a lot throughout those eighteen months.  It changed every time we showed the film within Disney.  It would have a new story on a slightly different Anna and the funny thing was that the first song we wrote that stayed in the movie was Let it Go and that became the linchpin not only of the score but kind of Elsa.

Kristen Anderson-Lopez on the song Let It Go, sung by Idina Menzel as Elsa:

That’s the first song we added to the film. It’s not the first song we wrote but it’s the first song that stayed in the movie and what’s interesting about that song is up until we wrote that song everyone’s like Elsa’s the villain, Elsa’s the villain.  And once we wrote that song and it wasn’t even that we set out intentionally to make her not villain, we didn’t know.  But once we captured what you would feel like if you had held onto this secret and then you went up to go up a mountain and let go of everything you know but it also meant letting go, letting go of all the holding back you’ve been doing for so many years and becoming your true self.  Once we captured that moment and that truth about Elsa there was no way she could ever really be a villain.

Kristen Anderson-Lopez On how writing a movie score is different than writing a Broadway show:

One thing that differs greatly from a lot of Broadway shows is you don’t know who you’re writing for but we knew we were writing for Idina Menzel who had this amazing instrument where she could have the sweetest vulnerability and really make you care but also blast you out of your seat with big high notes.  And then Kristen Bell, hers mind is so fast and she’s so funny and we kind of all started writing differently to capture that.

Well honestly the inspiration for that is Bobby [husband Robert Lopez]. When we were first dating, I used to talk about him to my girlfriends as like he’s a bit of a fixer-upper.  He lived with his parents but I was in love with him. I knew I was gonna marry him but he lived with his parents, he didn’t have a job. He was writing this crazy, puppet musical [Avenue Q] and so the word, fixer-upper, has always been in my lexicon.

When we realized that Kristoff was going to have this relationship with the trolls which was kind of the key discovery we realized that it was kind of like okay, he’s bringing this girl that he’s not dating home to this big, ruckus family and they’re gonna misinterpret the situation.  So we thought oh, gee it’s gotta have that kind of New York dating song cabaret feel and so that’s how the music kind of came about

Need more Frozen? Check out my interview with the fabulous actors who bring the Frozen characters to life: Kristen Bell, Idina Menzel and Jonathan Groff.