In “Frozen,” fearless optimist Anna (voiced by Kristen Bell) teams up with rugged mountain man Kristoff (voiced by Jonathan Groff) and his loyal reindeer Sven in an epic journey, encountering Everest-like conditions, mystical trolls and a hilarious snowman named Olaf (voiced by Josh Gad) in a race to find Anna’s sister Elsa (voiced by Idina Menzel), whose icy powers have trapped the kingdom of Arendelle in eternal winter. 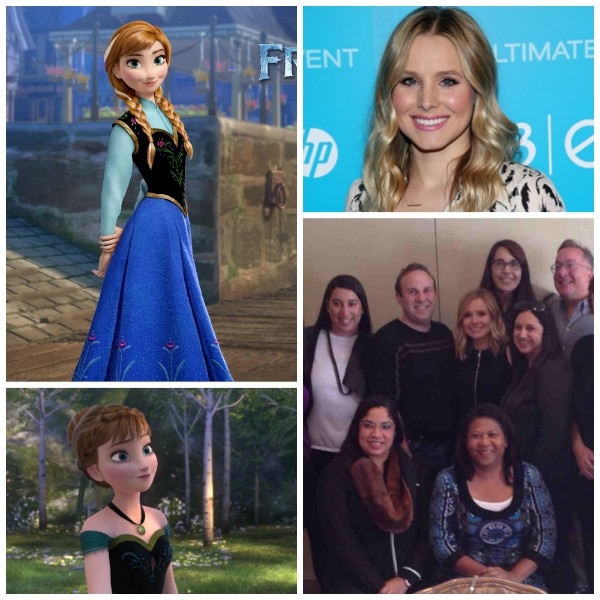 Kristen Bell (Anna) is best known for her roles in Forgetting Sarah Marshall, Couples Retreat and Veronica Mars. In Frozen, Bell plays the younger sister, Anna, a quirky and lovably awkward girl who embarks on a perilous journey to save her sister and her kingdom.

On the experience of being a Disney Princess:

I feel very excited, but my main goal, I swore if I was every lucky enough to be a Disney Princess was to make someone that I felt that I could relate to as a child and I was a weird little girl. I talked to myself, and I wanted to eat dinner next to the dog and not at the table, I did a bunch of weird stuff. I was really clumsy, so my all-encompassing intention was that I didn’t want to play a girl with good posture. I didn’t want to be the classic princess girl, which you see so often. But lately, they have lent themselves to, with Brave and Mulan there are fighters, there are stronger female characters but I felt like I hadn’t seen one that was all too goofy and in, not the cute goofy way and clumsy. Everything I brought to the table as far as ideas go I would say, what if she tripped, what if she really couldn’t dance and what if she was goofy and talked way too much before she thought. All of these things are things that I do and wanted to see on screen and they said yes to every single one of them and it was really exciting.

On her singing role in the film, which surprised many fans who didn’t realize she could sing:

I studied music in college, and I studied voice specifically and I grew up doing solo and ensemble competitions which like the nerdy music version of volleyball or a sport and I loved it. I sang only in Italian until I was about 15 until I had after school homework of Greenfinch and Sweeny Todd and after that I digested any and all musical theater I could get my hands on and so I’ve always kind of been a music theater junkie and have done a little bit with voice, I did a Showtime Musical but ultimately I just do benefits and sing when I can in LA so it was great to fuse the two.

On how her view of love has changed since becoming a mom:

I think I’ve felt three phases of love in my life. Growing up I thought love was something you feel. As an adult I’ve realized that love is a choice you make, and that choice leads you to your feelings because you look at someone and go, well, I’m going to love you, even when you’re annoying. And you’re going to be annoying. And so am I. So from love is a feeling to love is a choice to having a baby, love is an uncontrollable DNA urge, and that’s the coolest of all of them because it’s the most unleashed of all of them. I open my eyes in the morning and I am thinking about her and we put her to bed I’m constantly looking at Dax and saying, let’s just go and wake her up, because I want to hang out with her. I am intoxicated by her. I can only liken it to when you’re in middle school and you have a crush on someone and it aches and they’re all you can think about but it only lasts three months only this is eternal.

On what she is taking away from this experience:

I walked away from this movie really, really proud. My husband is always telling me, embrace who you are. I don’t know if this is right but I have always discussed with friends that a trap actresses can fall into is when they try to conform, try to be something they’re not. Some people are weird a quirky, be weird and quirky. Some people really are the perfect ingénue, be the perfect ingénue then. Not that you can’t cross the streams, just embrace who you are and bring that liveliness to your character. I wanted to indulge Anna in all these weird characteristics that I wanted to see as a kid and I think I walked away having created something that I’m really proud of because I embraced all of my weird personality quirks. 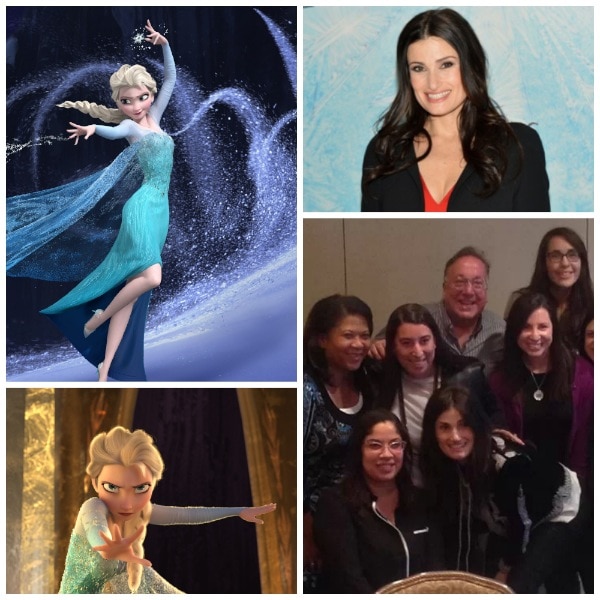 Idina Menzel (Elsa) is best known for her roles in Rent, Wicked and Glee. In Frozen, Menzel plays the elder sister, Elsa, who becomes Queen of Arendell but hides a dangerous secret.

On her sister-like bond with costar Kristen Bell:

Yeah, we’re buddies and I’m a huge fan of hers and we got to work together a little bit, a lot more than for your normal animated film.  We were in the studio a couple of days and worked off of each other and we sang together.  Our first experience together we had to do a reading together a couple years ago when we were first getting involved with Frozen. We sang Wind Beneath My Wings because there was no music written yet. It was Kristen’s idea.  We were trying to find a song that was good for both our voices that can be like a sisterly duet.

On the experience of working with the Disney Animators:

I’m really astounded by the process of making an animated film after doing this and they allowed me to kind of see behind the scenes.  The animators would ask me questions about craft and singing and how I breathe when I sing and how I would move if I was this character on stage and things like that because their attention to detail is so committed and specific.  They were interested to know that I breathe from here, [indicating her ribcage] not from here [indicating her diaphragm].  So when my character sings she’s breathing the way I do when I sing. All the research everyone did really pays off. It’s a stunning film.

On whether she wants her son to follow in her acting footsteps:

I hope not but he seems to be quite a storyteller that’s for sure. It’s a certain type of person that you are when you’re in this world, we’re all so neurotic and insecure yet we’re confident enough to get up in front of people and expose ourselves.  What is that? I’m always thinking about and having to make myself vulnerable in front of strangers. But I don’t know.  He seems more like he’s going to be a director.  We played a game where we tell stories and each person does a line for a story but then he takes over.  And I say it’s a T. Rex and he’s like no, it’s not a T. Rex that came into the castle.  It’s a spinasaurus. He’s very bossy and very specific about stories.  He’ll be a director. 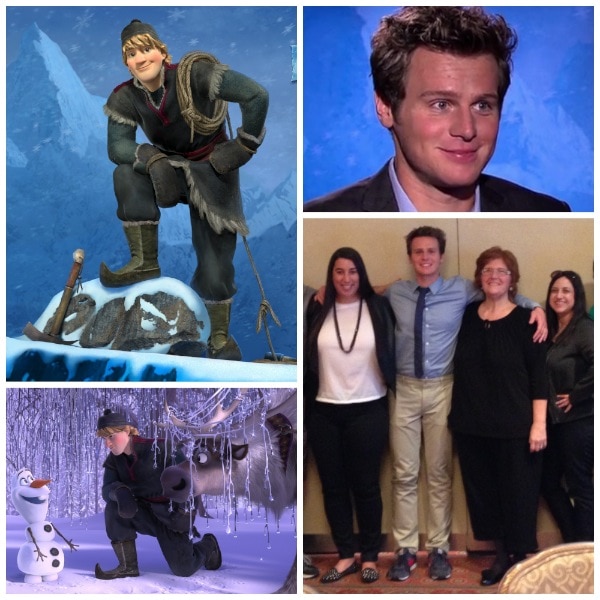 Jonathan Groff (Kristoff) is best known for his roles in Spring Awakening and Glee. In Frozen, Groff plays the rugged mountain man, Kristoff, who prefers the company of his reindeer Sven to other people.

On the experience of becoming a Disney character:

I was overwhelmed.  I mean, it was exciting, obviously as a fan of Disney films growing up, it was surreal and exciting to see one with my voice as one of the characters.  But even beyond that, and even more than that, I felt really proud to be a part of this movie in particular.  Because I feel like this is like a classic Disney film, that, that I grew up with.  And it’s also turning it on its head in a really interesting way.  In a really surprising way.  And in a way that I feel like I’m so excited that the young, a young generation of kids is going to see a movie like this.  Where it’s not your traditional sort of princess and prince charming movie.  First of all it’s like an action adventure movie.  And there’s great music involved, that the music is written by these composers that specialize in sort of funny sort of off-beat humor.  And the message of the movie is so broad and progressive, and in a way that I’ve never experienced in a Disney movie before. I feel so lucky to be in a Disney movie period, but beyond that I feel so proud to be in this specific movie.

On the experience of working with the Disney animators:

They videotape us while we’re saying the lines, so that the animators can, match the line with a certain facial expression to help to match the voice and the face so that it looks even more realistic. Our lead animator told me, you’re going to get freaked out when you see the movie, just be ready.  Because you’re going to see yourself in him in flickers of certain moments and things that he does, and I definitely saw that, it was really cool.

On how the story evolves during development:

And the big lesson I learned as I was working on it was because they spend so much time rewriting it and perfecting the story, there was a lot of it. I was so excited to see the movie a couple weeks ago, because I didn’t remember which version of my character made the final cut. At one point my character was a hoarder.  My sleigh was filled with junk, all my life was in the back of it and it and I was slightly more insane.  And later they added the trolls, which is a big element of the story. There are all of these story elements that they kept putting together and doing screenings for people and trying to get the tightest best version of the story.  It was exactly like developing a Broadway show, because it was constantly being rewritten and making and improvements to the story

Need more Frozen? Check out my behind the scenes look at Frozen with the Animators, Directors and Composers.

Garry : You know I really liked that movie, 'cause of all the flying and the magic.