Daily Diary: I Want To Get Married Again 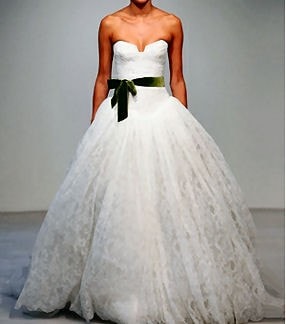 Over the weekend, I watched ‘My Fair Wedding with David Tutera‘. I’m not really a reality show person… unless it involves swamp people or the paranormal. However, my friend Audrey insisted we watch this show because it’s one of her favorites.

I watched an episode about a bride who didn’t have the funds to have the “royal” wedding she really wanted. Her name was actually Aurora – which ironically is one of the famous Disney princesses. Anyway, I was so happy for her every step of the way. And then they got to the wedding dress part. Aurora came out with a veil on and at first she really didn’t like it. But then David said, “When will you ever be able to wear that veil again?”

And the answer is never. Unless you divorce and marry again of course…

When he said that, a shock went through my body.  I was SO YOUNG when I had my wedding. I went dress shopping at 22 years old. I didn’t get the finality of the whole thing. I was trying to save money and be simple with my accessorizes. I sort of got through the whole thing as if it was a check list that I needed to complete. I think I tried on 2 veils and that was that.

Over the weekend, I realized that moment of my life is long gone… and will not return.

Even if you renew your vows. I’m not going to wear one of these dresses again, right? That would be insane! The only thing that would SORT of make sense is if I wore MY wedding dress. But I was at least 12 pounds lighter and that ship has sailed.

I guess that’s why parents make such a big deal about their children getting married. You SORT of get to relive the moment again  – through your daughter’s eyes.

Too bad there isn’t another grand event in our lives (around 40). Wouldn’t it be fun if there was something HUGE you had to plan for at an age where you really knew who you were?

I’ll be married 10 years next week. Perhaps, Bill and I will plan something fun for our 20th? Did you renew your vows? Do you plan to? How big will you go?