Daily Diary: What Happens When A Serious Gamer Has Children

Ok folks… this is a problem that millions of people are going to face over the next coming years. I am part of the Atari Generation. I’ve had every console known to man and I’m actually not kidding. My father was a computer programmer and he even used to build me video games using our Commodore 64 when I was a little girl. I grew up gaming. Sure, back then it used to be pieces of toast running around (that was the first game he ever built me)… but the point is that I’ve been playing since I’ve been walking.

Fast forward through all the Nintendo, Playstation and the XBox machines and you have me now with children of my own. Natalie (8), Liam (6) and Caleb (10 months). We currently have PS3, Wii, Wii U, X Box, Nintendo DS, iPads, LeapFrogs and if I thought about it I am sure I could name a few more machines. Yup. We are a gaming family and I am the head of the clan.

My husband… not so much. It’s all me. There even was a point in my life where I was heavy into World of Warcraft. Am I really admitting this online? Oh my goodness… I swear I will start talking about lipstick and cupcakes in a bit.

ANYWAY — we’ve been happily playing Minecraft, Disney Infinity, Skylanders, and the LEGO series for about a year. The kids were OH SO HAPPY with these titles and I was too. But this week, I let them have one of their Christmas presents early because I wanted to play the game quite frankly. I couldn’t wait until Christmas. I’ve been DYING to rip open Super Mario 3D World since it was delivered to my house from Amazon and totally caved once we were snowed in this weekend.

We played for HOURS. It was so fun. But apparently I was a little crazy with the kids because they obviously were not the greatest players. It was their first time playing a game where you ACTUALLY DIED. All the other games they’ve played so far just constantly continued. But this game would END and you would have to start over and re-beat a ton of levels to get back to where you left off. This would pretty much drive me crazy. And I wouldn’t YELL at them… but I guess I would not be so quiet either. Because I got this letter from my son after our little play session…. 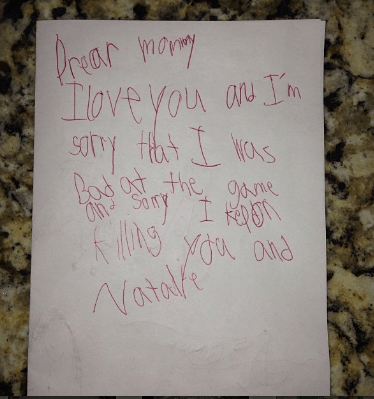 Can someone bury me in a hole so I can hide for the rest of my life? WHAT HAPPENED THIS WEEKEND? I must have been insane while I was playing with them! Who knows what I was saying — I probably kept screaming “STOP KILLING ME – STOP MOVING SO FAST. WAIT FOR ME. YOU PUSHED ME OFF THE LEDGE.” Etc over and over again. Because it’s true-  that’s what they did. If one person pushes forward while another is to the left of the screen the first person can kill the second and it happened a ba-billion times. But as a parent, I should have just kept my mouth SHUT. But instead I DIDN’T because I’m PSYCHOTIC and because I am a true gamer at heart and because I want to win… and so I just blurted out these things like I was playing with an adult instead of with a child.

I don’t know if those are the things I said – but I am sure they are. Oh my goodness…. I can’t. When I got this letter from Liam, I just about collapsed into his arms and told him I will never be crazy gaming with him again. Ever – ever again. I pinky promised. After dinner, we started up Super Mario Bros. and I kept my mouth shut and they killed me a billion times and I just smiled because that’s what a parent is supposed to do, right? BIG SLAP in the face. BOY!

Sometimes the kids teach lessons to the parents, right?

And in case you want to HEAR what it sounds like when we play…. here you go.