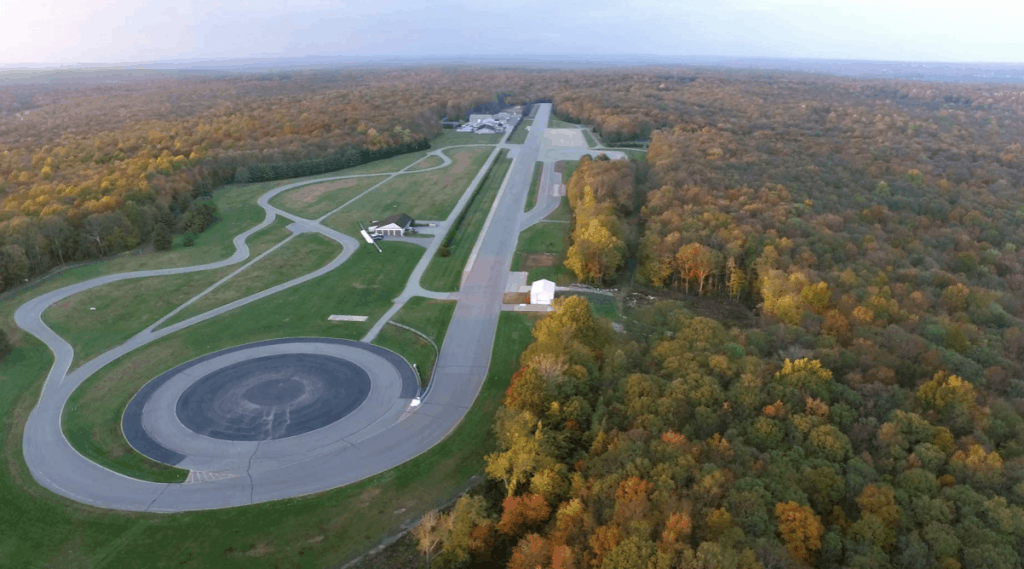 Consumer Reports has been around what seems like forever. It’s one of those companies that you simply take for granted but really should not. In a few months, I’m turning 40 and I literally can’t remember a time without this resource… makes complete sense considering this organization has been around for 80 years!

Consumer Reports is an independent, nonprofit organization that works side by side with consumers to create a fairer, safer, and healthier world. There is no hidden agenda. There is no under the table deal that they are trying to promote. Consumer Reports has one job – to make sure consumers have the trusted information available to them when needed. Period.

Empowering their readers with the information we need to help us make better purchases. Brillant. So, why haven’t I been using them prior to this year? I just don’t know.

The Consumer Reports Auto Test Center sprawls across 327 acres in rural Connecticut, where CR pushes the cars and trucks they test to their limits to get all of the information and insights you need to make a smart auto purchase. Just so you know, they purchase every single car they test. I was sort of nonchalantly walking through their auto test center absorbing everything that I could during my recent visit. I was greeted by an incredible staff of knowledgeable employees and freely asked questions about their operations. However, it wasn’t until they started to break down our group into smaller pods that I fully understood the impact of their testing.

Consumer Reports changed the Automotive Industry in a number of ways throughout the years. I’m just going to focus on a few moments in history to give you an example of the power of their research and testing abilities.

Consumer Reports’ tests are data driven. In the 1980s and 1990s, Consumer Reports saw through their “avoidance maneuver” testing that SUVs handled differently than other cars. Because they were concerned about SUVs and their potential for rolling over in an accident, they petitioned the government in 1996 for a consumer information program that would rate cars on how well they performed in rollover tests. The government granted that petition. In the 2000s, CR noticed that cars and especially SUVs performed better with a lifesaving feature known as electronic stability control. CR pushed the government to make that technology standard on every car, and the government agreed to do that in 2007 with all cars having to carry ESC by 2012. And if you check out statistics dating before 2012, you will notice there is a DECLINE in rollovers which is directly related to the actions of Consumer Reports. I found this simply fascinating!!

I thought to myself, why didn’t the automotive industry do this on its own? Even more- why didn’t the government find this through their own testings?  Sometimes things slip through the cracks. This is a true part of life. We need organizations like Consumer Reports running independent tests to fill the gaps and put a spotlight on what needs to be done to keep consumers safe.. A true IMPACT was made – and this is just one of many thanks to evidence-based product testing and ratings, rigorous research, hard-hitting investigative journalism, public education, and steadfast policy action on behalf of consumers’ interests. 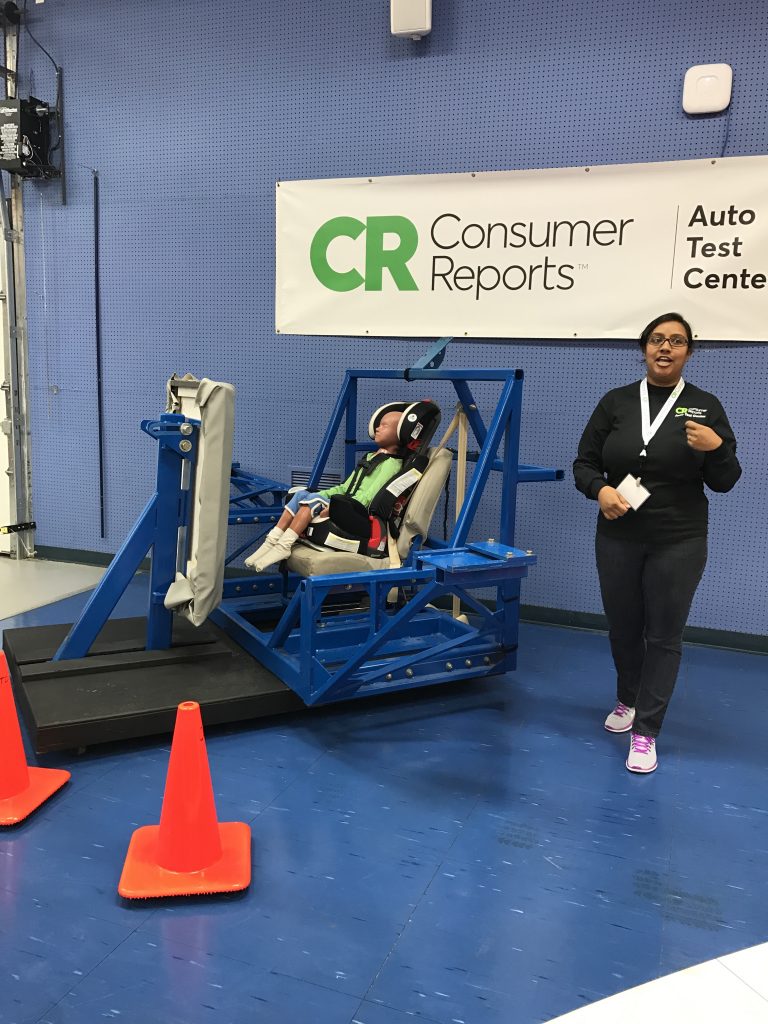 I Believe In Consumer Reports

I want to preface this section by saying that every single child car seat that is rated by Consumer Reports is safe for purchase. It’s not about whether the product is safe to use. It’s more about whether it’s better than other similar products available and in the market.

As a parent, I was SHOCKED to hear about some of the downfalls and all that is lacking from government testing when it comes to baby car seats. 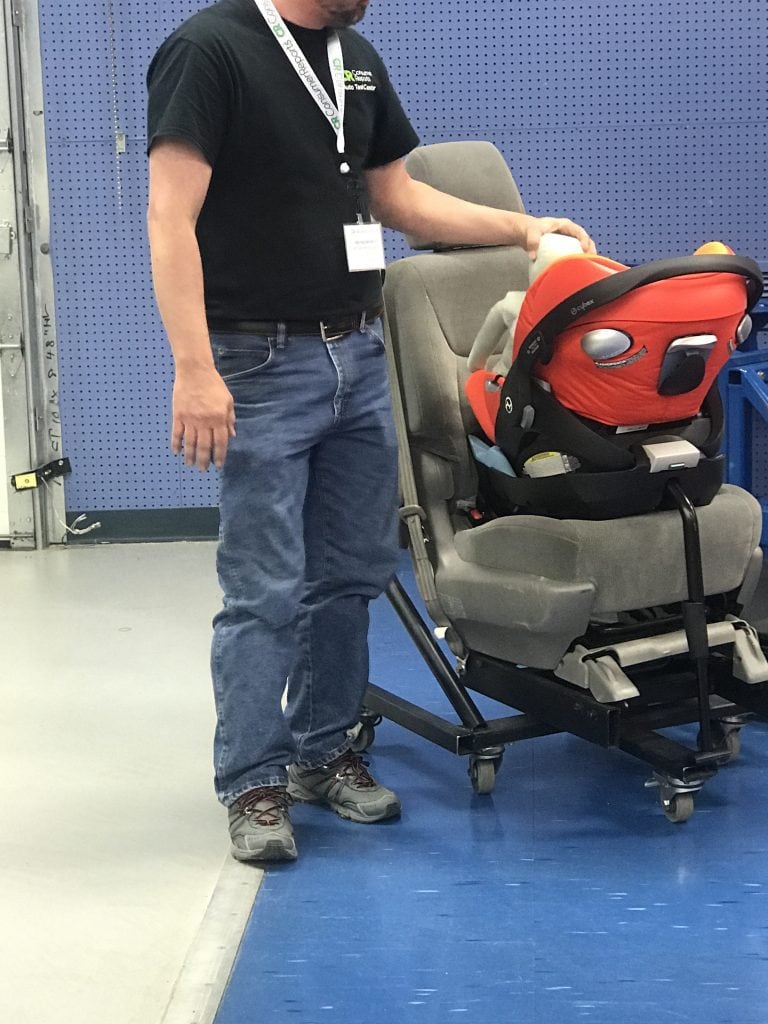 Did you know that government testing does not include a front seat placed ahead of the baby car seat in its tests? They also don’t use standard vehicle seats found in today’s cars to strap in the baby car seats. So, in actuality, it doesn’t really feel like the right environment to me.

Think about what I am saying — there is no front seat for the baby’s head to hit in a crash simulation. How do you know what kind of impact the baby will feel in a car seat if there is no FRONT DRIVER SEAT TO HIT? I just don’t understand this? Consumer Reports wants to understand the impact – if any – and places a strip on the face of the dummy as well as the back of the front seat and looks for contact. AS THEY SHOULD! I’m glad to know that Consumer Reports is adding another level of safety checks to the industry.

Tire Safety And What You Should Know About Maintenance 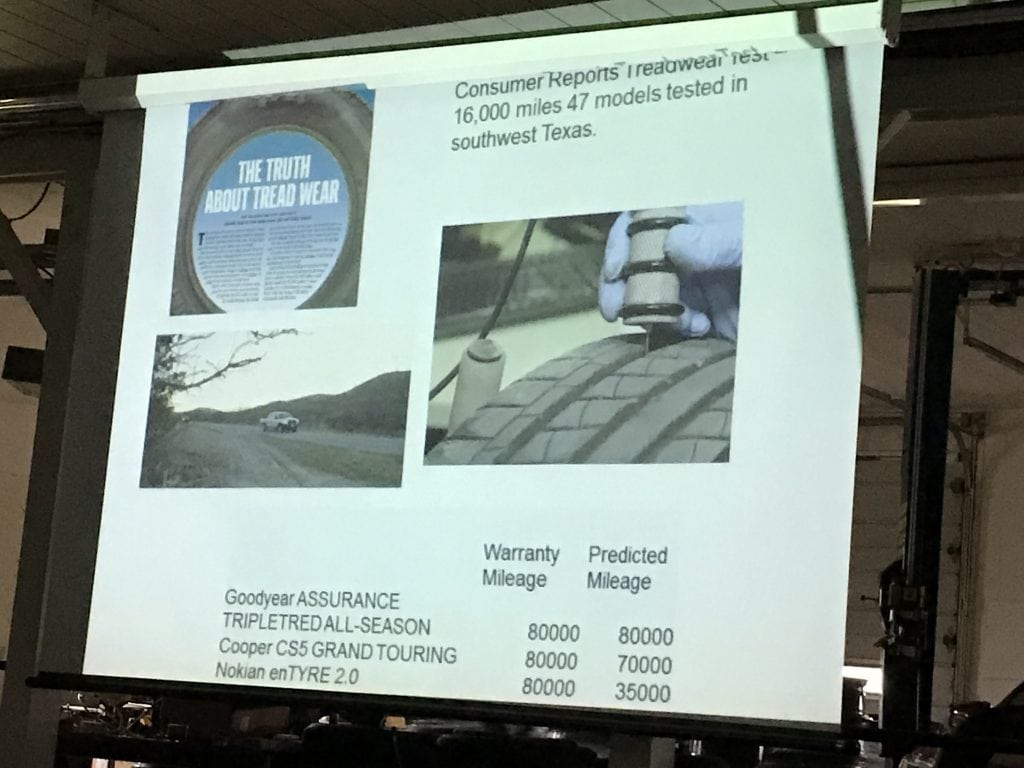 I’m not a car person. I just found about two years ago that the little arrow on the dashboard indicates where your gas tank opening is on your car. When I tell you I have no clue what is going on with my vehicle, you better believe it.  I want to give you an example of why Consumer Reports is so important. Check out the Warranty Mileage vs. the Predicted Mileage for some well-known tire brands that you may have heard of. The first two – Goodyear and Cooper – either met their warranty or came pretty close to it after going through Consumer Reports testing. HOWEVER, look at the third brand – Nokian. They are WAY OFF of their estimates. Their tires will only last a predicted 35,000 before wearing out!! That’s something to consider when making a purchase, right? This is why Consumer Reports is SUCH a powerful tool for consumers. Take a few minutes to do your research on cr.org and then know what you are getting before spending your hard earned money. 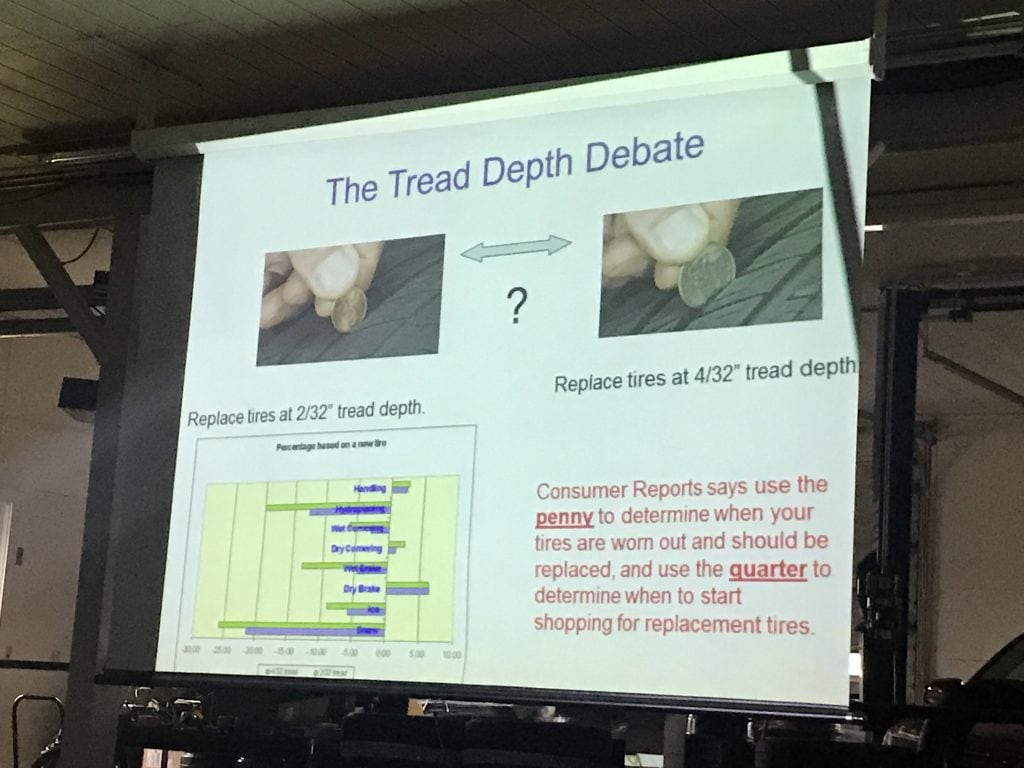 And while we are talking tires, I wanted to put this information on this post because I LITERALLY HAD NO CLUE ABOUT HOW TO CHECK for this sort of thing! Using a penny and a quarter, you can see whether your tire needs replacing. After reading this post, you should go outside and check your four tires!! It will take two seconds. PS – Consumer Reports says to NEVER buy used tires! It just isn’t worth it. 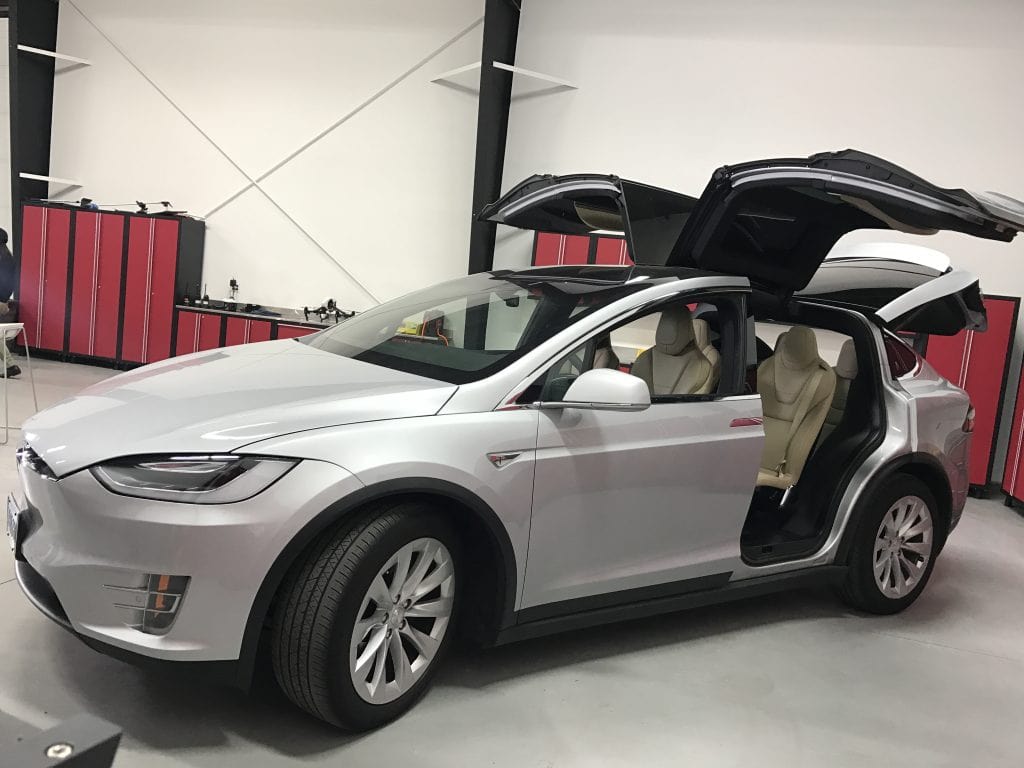 Consumer Reports purchases every single car they test. They do this because they don’t want to OWE a brand anything. If a brand gave Consumer Reports a loaner, they might feel obligated because of a relationship. In order to keep everything as clean as possible, Consumer Reports acts as a true consumer. They walk into a random dealer and make a purchase as an individual. That way they cannot receive a special car.

Consumer Reports named its 10 Top Picks of 2017. The best new cars of 2017 are outstanding all-around performers—shown to be reliable, safe, and satisfying. That means they have scored high in Consumer Reports stringent track tests and extensive owner surveys.  Is yours on the list????? Finding the perfect set of wheels is easier than you think. Visit cr.org/buyacar to choose new or used, save money, and learn all about financing, safety features, insurance, and tires.

Forever A Fan Of Consumer Reports

Consumer Reports is non-profit and independent of corporate and advertising influence. Everything they do is coming from a very truthful place. I cannot tell you how excited I am to be working with them. If you saw me in my day to day life, I am borderline manic about the situation. A friend wants to buy a new refrigerator and I am all, “HAVE YOU CHECKED CONSUMER REPORTS?!!?!?!?!?!?!?!!?!?!”

Omg – this just got real, folks. 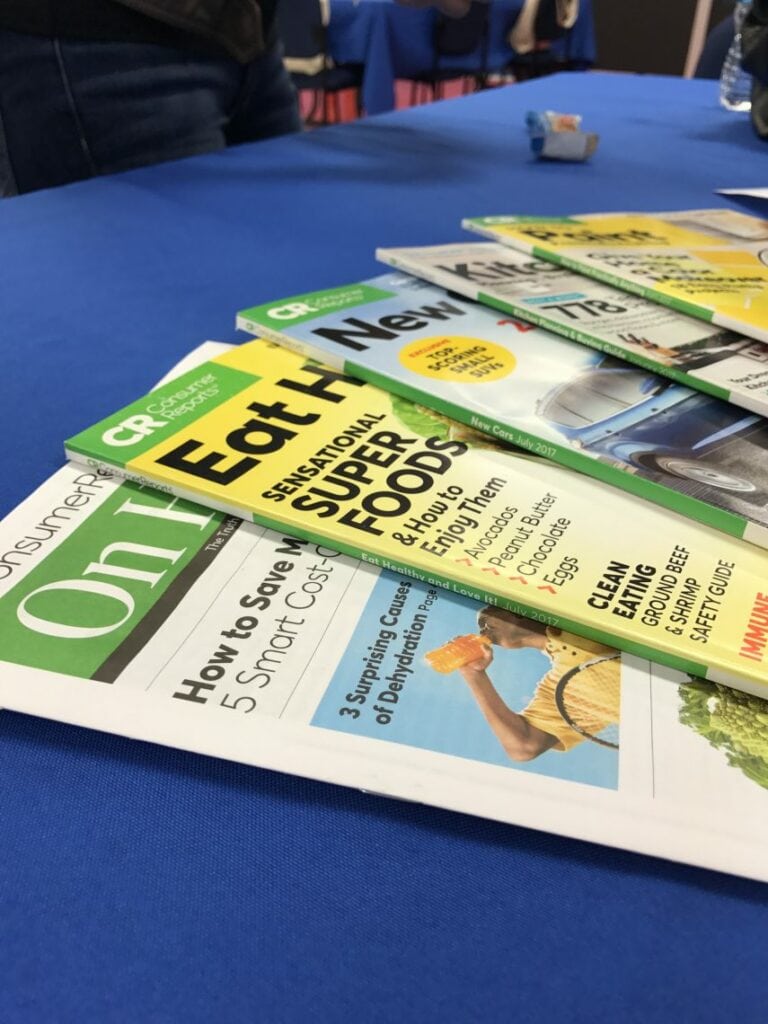 Wisdom comes with age. Isn’t that a saying somewhere? I didn’t know in my 20s!  I just didn’t!! Now I do.Consumer Reports works for and with consumers – do not forget this! Head on over to Consumer Reports and opt for either a digital subscription, print, or a combination of the two! You will not be disappointed.

Subscribe to Consumer Reports today to get digital access to CR’s independent unbiased ratings and reviews for the products and services you use everyday.

Sidenote:  I was reading one of my magazines and they even graded Organic peanut butter!!! Nothing is off limit, folks. NOTHING.