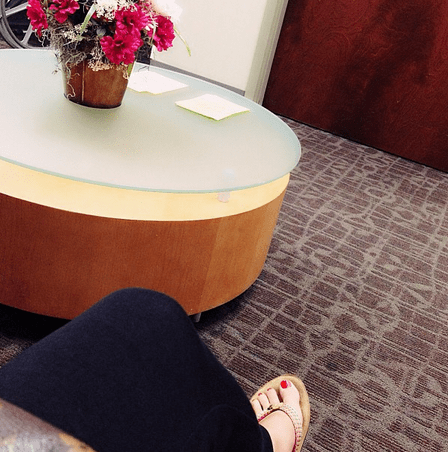 I didn’t blog about this when it actually happened because I was in quite a shock for a few weeks. It was probably the scariest moment of my life and in a single instant I realized how quickly everything could change in my imperfect little world.

At my 6 week checkup after having Caleb, my doctor found several large lumps in my left breast. Within 2 minutes, she had me getting dressed and in her office as she called upstairs to squeeze me in for a mammogram. It was urgent. She “wasn’t going to let me leave the building until I had it checked out”.

I sat there in silence trying so hard not to cry because I was all by myself. I thought it was going to be a routine checkup. I went alone. Bill was home with the baby. I was going to go to Starbucks after my appointment was over. It was all supposed to be easy. But it suddenly turned into something much more.

“You’re freaking me out”, I told my doctor as I tried my hardest to hold back my tears. “I’m sorry. There’s no way to sugarcoat this my dear”, was her reply.

And so within 10 minutes I was in front of another receptionist handing in my info. And then I waited. Because I didn’t have a proper appointment. And I texted my husband until my phone died. He searched online for answers. I read and read and read trying to find some solace in the waiting room.

When it was my turn to finally go in I was told that I couldn’t have a mammogram because I just gave birth. I had to wait at least a few more months before getting on the books but they would do a sonogram instead.

She checked and found that my left breast was FILLED with large cysts. Mass after mass that I never felt. A little TMI – but my left breast is slightly larger than my right and I just thought that was me being unsymmetrical.  The good news? They were nothing to worry about. Probably something that I was born with. Probably something that I will always have. They don’t have to come out. They will not bother me. Large breasted women are prone to them. It’s all good. (And PS – my mom has them too I found out later)

When I got home and walked in the door I collapsed into my husband’s arms. We cried. Because it was such a scary morning. Those three hours could have permanently altered the course of our lives. It would have taken one test result to shift our lives forever … or to potentially end mine.

While I was waiting for my turn in the doctor’s office I kept thinking to myself…. “this is how I’m going to go. this is how HE is going to take me.” Even now I’m starting to cry because I accepted it for those few instances. I wrote myself off. I gave back the keys and kept thinking about how I would haunt my children until they were old and grey so I could still be part of their lives.

But again – it was all good. I made an appointment (for yesterday) to come back and do a proper mammogram. They said 5 months after giving birth was enough time to heal before doing the test. And honestly… it wasn’t as bad as everyone says.

There’s 4 squishes. One breast at a time. The top to bottom squish hardly hurts at ALL. I was like… THIS IS IT???? The breast is placed on a glass plate and then it is pressed but not FLAT LIKE A PANCAKE like I was told. It’s pressed a bit. I am a 36C – so I don’t know if that makes a difference? But honestly – I was like… really?

The sideways squish I FELT but after childbirth it wasn’t a big deal. LOL! And besides – it’s for about 5 seconds a breast. Hold your breath if you need you. Stop letting people get you all riled up about the pain. It will be fine.

Luckily, I don’t have to go back for 5 years. I’m only 35. I thought she was going to make me go back once a year from this point – but my mammo showed that some of the cysts actually went AWAY which was great news. There was no concern at all and that made me (and my husband) very, very happy.

Have you had a mammogram before? Did you tolerate the pain??