Backyard Summer Fun: Back To Basics

Each and every day with my toddler is quite an adventure. My Penelope is ever so curious, absorbing information at every turn, and making sense of the world around her. Sometimes I can’t help but reflect on my own childhood and compare the similarities between our experiences. I didn’t have what my neighbor so keenly dubs the “electronic nanny” (a.k.a. the tablet), but I did have the summer sunshine overhead and my imagination to run wild with! 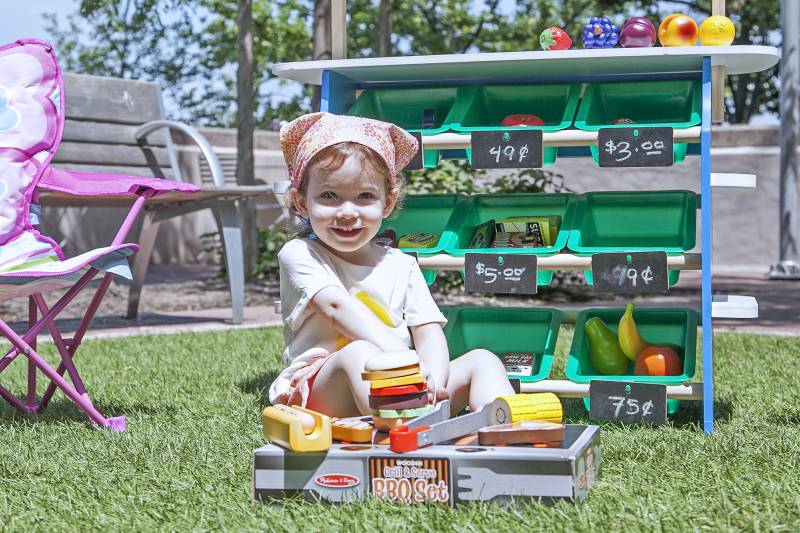 We have been looking forward to backyard summer fun for months now. Through the bitter cold New York winter, we were eager to get outside, roam free in the backyard, and just play. The kids were ready to enjoy some good old-fashioned wholesome fun in the sun. And that’s just what Penny and her BFF Noah did one afternoon this week. In a day that was filled with infectious laughter, the pair played in a way that made Noah’s mom (my bestie, Jessica) and me, totally nostalgic. 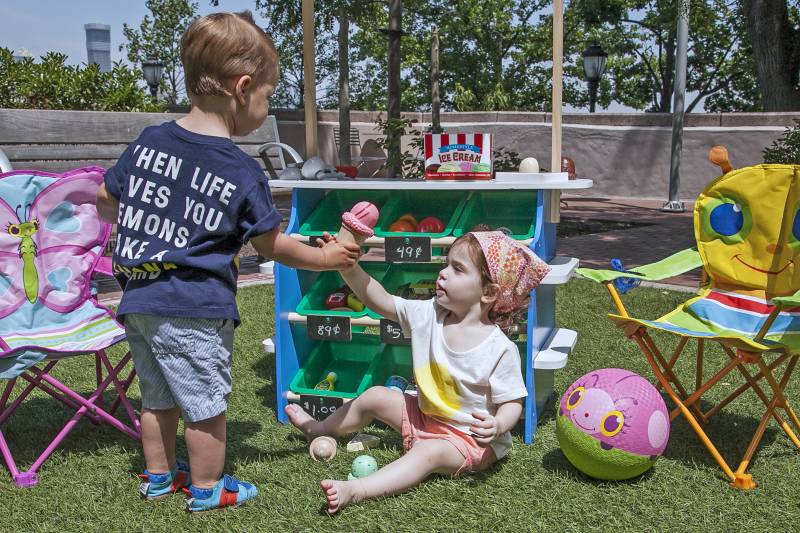 Penny and Noah (“Penoah”) have known each other since they were born, regularly getting together for painting playdates, toddler cooking sessions, and musical gatherings. I swear- sometimes I think they learn off of each other, grasping concepts through role-play and modeling. We were SO excited to get them outside with some of their favorite toys, having the time of their lives. Whether indoors or outdoors, our Melissa & Doug Grocery Store/Lemonade Stand is always a hit, but it felt that much more legit on a sunny day! The little chalkboards on removable bins really give the stand a custom feel to it. I also love that the removable bins make for great toy storage when not in use, but I digress… 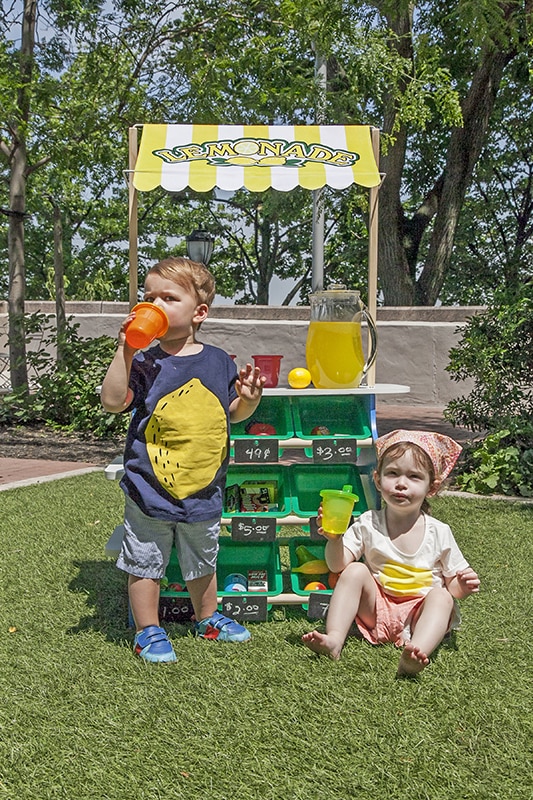 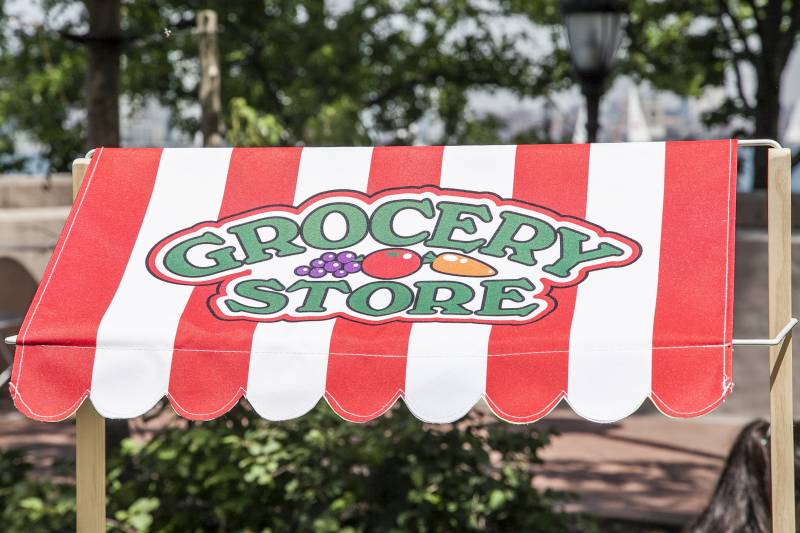 When we got the Grocery Store/Lemonade Stand about a year ago, I knew it was something we had time to grow into before the pair could begin making actual beverage sales. Nonetheless, they seemed to explore the concept as they took turns getting behind the counter, handing each other pre-filled sippy cups. They may be only two years old, but they definitely seemed to get the idea. 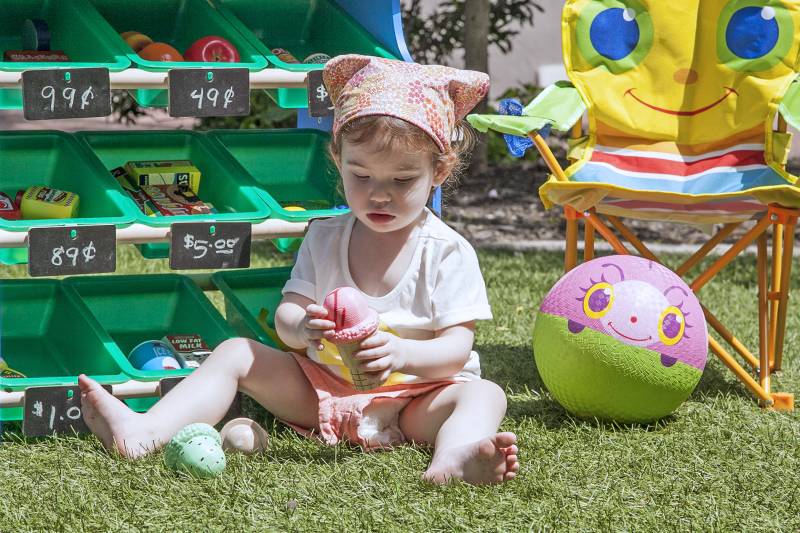 Serving more than just sippy cups to one another, the kiddos also served up cones. The Melissa & Doug Scoop & Stack Ice Cream Cone Playset is just about the cutest thing ever. That afternoon, we showed the kids how they can stack flavors of ice cream using the magnetic scooper. Not only did they find it fascinating, they also thought it looked pretty delicious too. I have since caught Penny having licks of a strawberry cone… 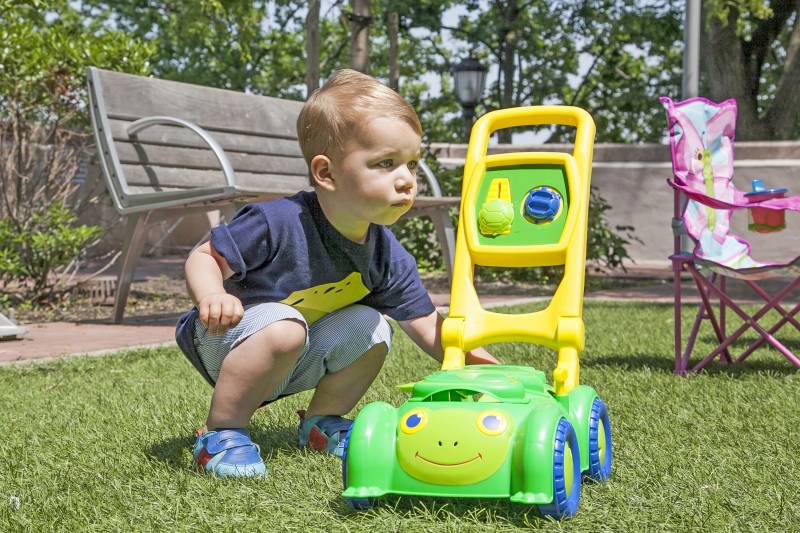 The Snappy Turtle Mower was the unexpected hit of the day. Noah happily “mowed” the Astroturf grounds, periodically taking a break to “refuel” the motor, and rev up the engine. Penny happily took the opportunity to push it along as well—the clicking noise of the lawnmower seemed to reinforce the fun of it all, really bringing it to life. 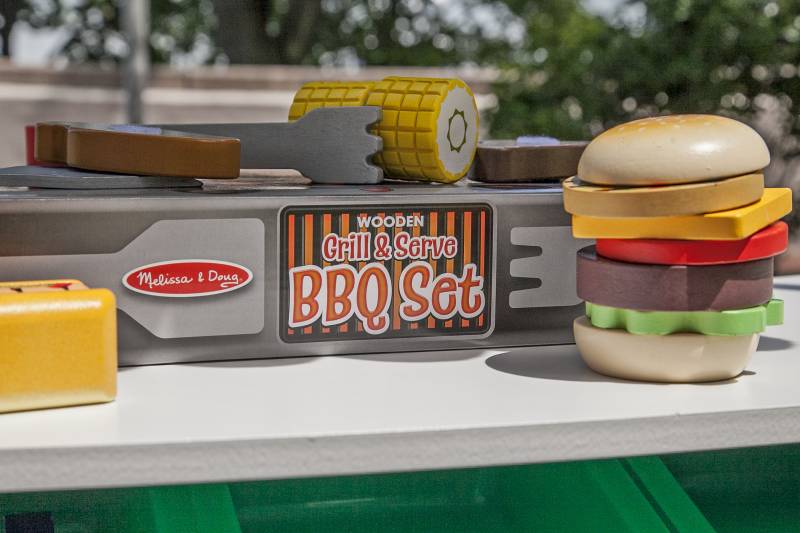 Since it’s not a summer party without a BBQ, we just had to bring out the Wooden Grill & Serve BBQ Set! The kids love stacking the burger, as well picking up the chops with the spatula, thanks to the hook and loop connectivity. Since we got this set, I can say I’ve enjoyed many wooden hot dogs and corn on the cob, courtesy of my aspiring grill master and two year old, Penelope. 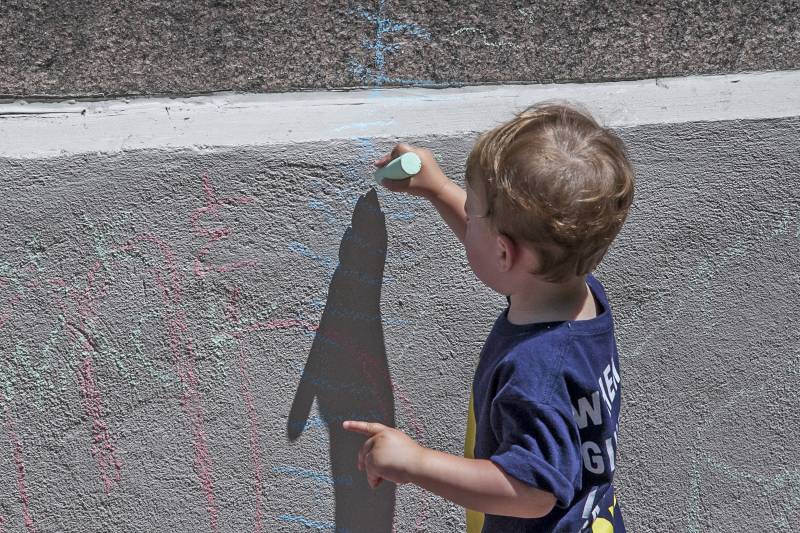 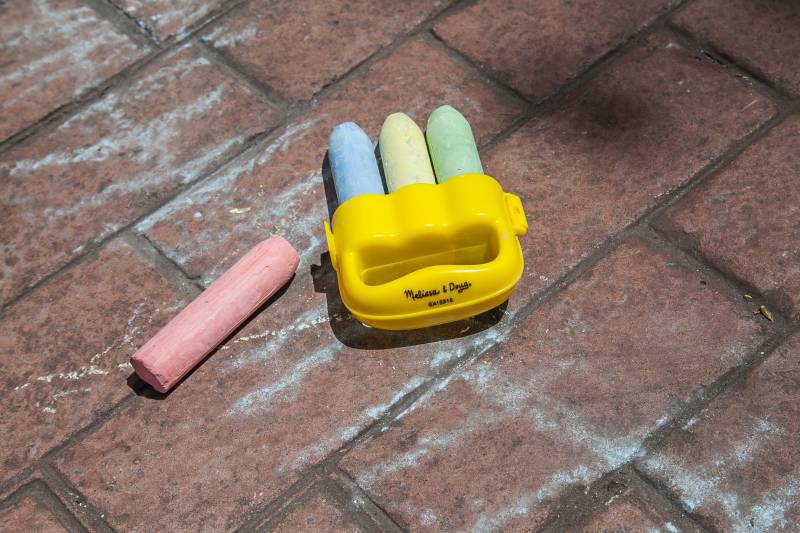 Noah and Penny are big fans of the Sidewalk Chalk Tools, and they quickly realized the answer to the question, “what’s better than a piece of chalk?” Holding three pieces of chalk at once, of course! After the initial drawing with the chalk in hand, us moms really appreciated the reduction of chalky remnants with the plastic holders. They also made for some very cool toddler street art. 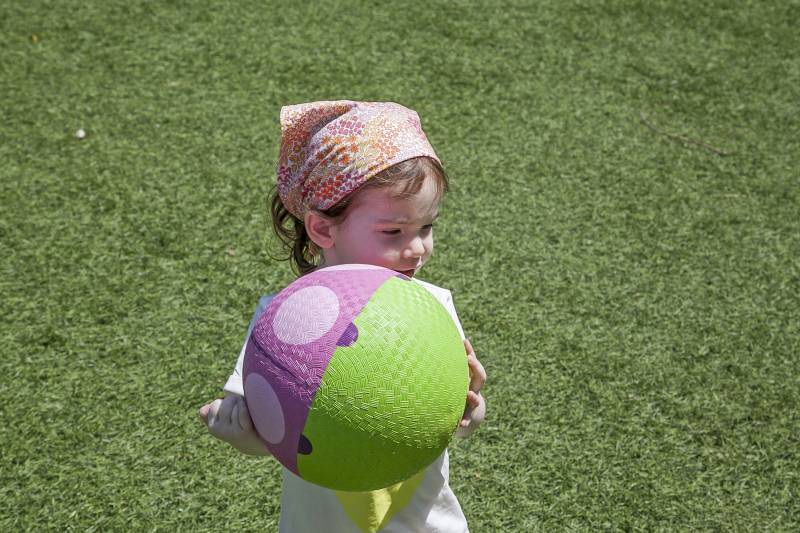 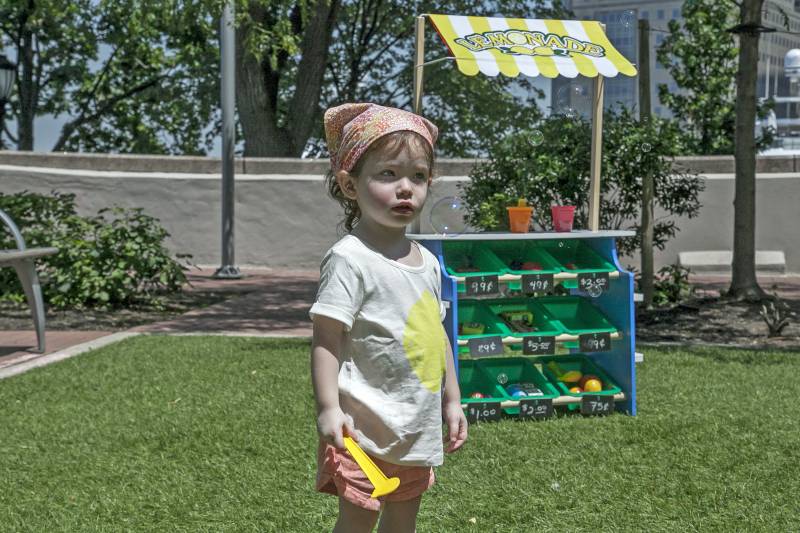 The Bollie Ladybug Kickball and Bollie Ladybug Bubble Bucket are the two objects of my daughter’s splendor. To Penny, they are basically evidence that magic is real, and nothing can convince her otherwise. That’s at least what it looks like. They are probably the simplest form of entertainment in the world, but isn’t that what makes it so beautiful? You know what’s also beautiful? No sticky hands from bubble solution spills!! 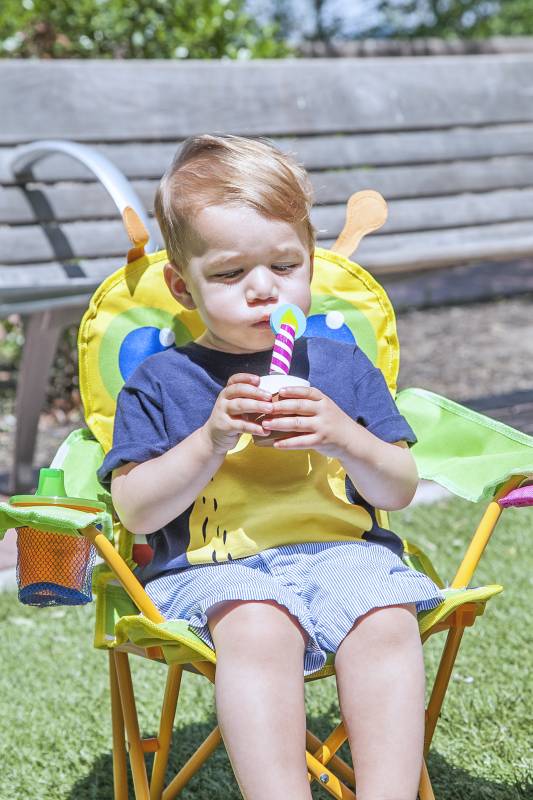 One of the best gifts Penny got for her birthday this year was the Bake & Decorate Cupcake Set. Whenever she plays with it, she sings, “happy, happy day to you!” Noah got a real kick out of blowing “out” the candle, as he laid back in the Giddy Buggy Chair, taking a break from all of their running around. Not only are the chairs adorable and convenient, they are super lightweight and so compact that they barely take up any space when folded up and stored in their closure case.

As a mom, I was in all my glory watching my little girl and her best friend having a great time as they played outdoors with their Melissa & Doug toys. I truly value any opportunity where fun and learning occur simultaneously. Being the big Melissa & Doug fan that I am, some of the products in this post I purchased prior to this story. For everything else, I’d like to extend a big thanks to Melissa & Doug for sponsoring this sunny and fantastic playdate!

Written by Samantha Sendor (and photographed by her super amazing husband, Steve, who she will incessantly keep asking to capture moments like these)