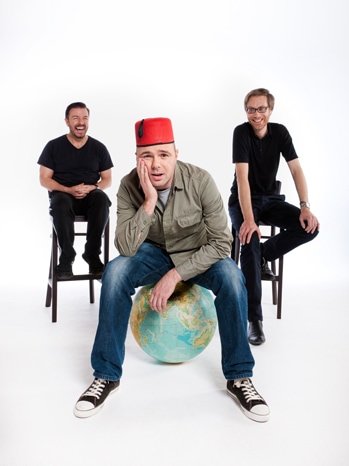 Late last night, I happen to catch Ricky Gervais‘ new travel / comedy show – ‘An Idiot Abroad‘. I literally laughed out loud at least three times. I am NOT ONE to WATCH COMEDY. Know this! The only other comedy I watch on television is ‘New Girl’ (another favorite of mine). Everything else is drama, dead things, and gore.

Anyway, the premise of the show is simple. You take an unwilling participant and put him on one of those “bucket list” shows. You know, the kind of series where the host is doing incredibly awesome / amazing / stupid / terrifying / death-defying tasks. Think: sky diving, bungie jumping, walking a volcano, spending the night with a New Zealand tribe, swimming with sharks – that sort of thing.

It’s fun to think about these things in theory – but imagine having to actually do them!!

Well, you can tell that the host is a good friend of Ricky because they have the same humor / mannerisms/ comedic timing. I swear – I was CRACKING UP!!!!!!!!!!!

Bill and I were in bed and it probably was around midnight. I kept waking him up with my laughter. Definitely worth checking out – and this is coming from a non-comedy fan. You won’t be disappointed.