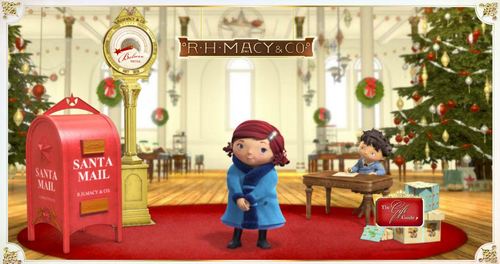 Macy’s Believe! nostalgic holiday campaign is inspired by the New York Sun‘s famous “Yes, Virginia, there is a Santa Claus” editorial from 1897. Macy’s stores across the country feature letter-writing Believe Stations and Santa Mail letterboxes for believers of all ages to write and drop off letters – stamped and addressed to Santa At The North Pole. For each letter received, Macy’s will donate $1 to The Make-A-Wish Foundation, up to $1 million, to grant the wishes of children with life-threatening medical conditions. Over the past three years, Macy’s has collected more than 4 million letters to Santa.

The Believe campaign runs through Dec. 24. For believers who want to help make a difference, just look for the “Believe Stations” in every store, Believe Meter, letter-writing desk and an official R.H. Macy’s Santa Mail letterbox.

Macy’s Believe-o-Magic app
For the first time this year, though, shoppers mailing their letters at Believe Stations in Macy’s stores will have an opportunity to take a photo with the campaign’s animated stars Virginia and Ollie from the animated holiday special “Yes, Virginia.” Using new augmented reality technology, customers with IOS and select Android smartphones can download the “Macy’s Believe-o-Magic” application that allows them to unlock the magic to see and interact with Virginia, Ollie and their friends. Customers can step in the frame and take a photo, which can also be uploaded into a holiday card template to share via e-mail or Facebook. Customers can also preview the magic at home by downloading the application and printing out the marker. When they point “Macy’s Believe-o-Magic” camera at the marker, they can see an animated Virginia ice skating right in their homes!

Believer of the Week

Enthusiastic Believe fans will have the chance to be featured in Macy’s Facebook profile photo as the “Believer of the Week.” 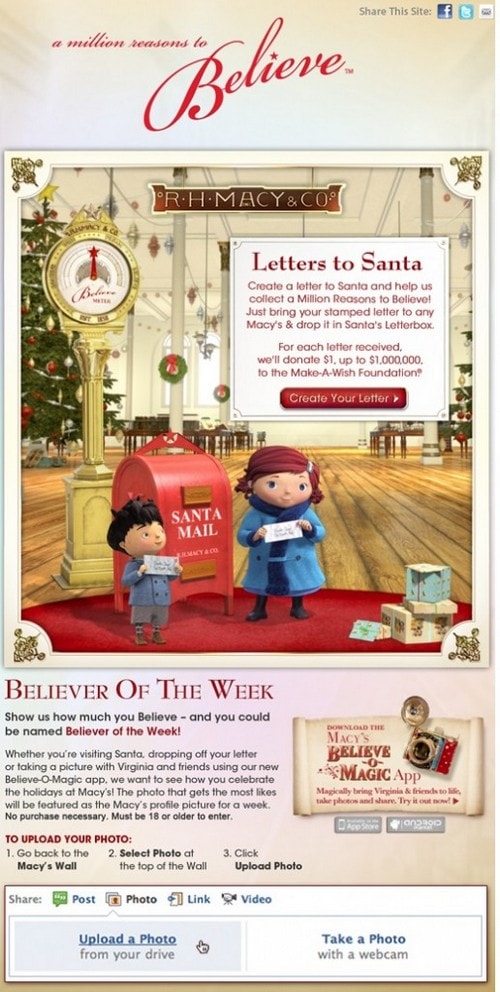 Write your letter to Santa online!

Create your letter to Santa online with Macy’s easy-to-use tool at macys.com/believe! After creating your letters and decorating them with fun icons, print the letters and bring them to any Santa Mailbox at Macy’s Believe Stations. Remember – for every letter sent to Santa, Macy’s will donate $1 to The Make-A-Wish-Foundation, up to $1 million! And while you’re at Macy’s, stop by Santaland to see the Big Man himself! 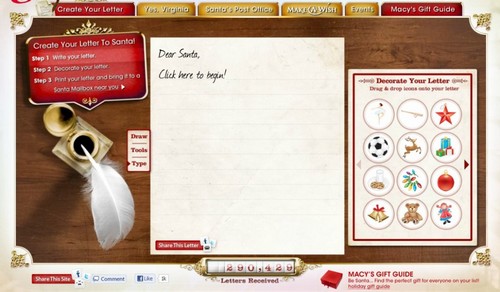 One (1) lucky LAB reader will receive a wonderful Believe Snowglobe!

How do I enter? You have a few options AND EACH COUNTS AS ONE ENTRY. Leave a comment with your email and let us know how you entered! There is NO LIMIT to the number of times a reader can enter (via any of the entry channels) this contest:

Winner(s) will be selected at random.