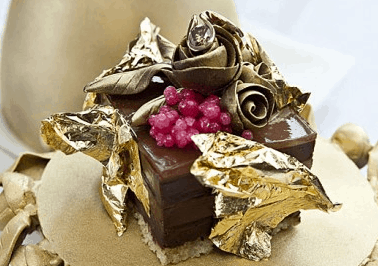 Please tell me this a joke. Please tell me that a hotel didn’t actually sell a $38,000 dessert this week to a wealthy man who just turned 60. I will never know what it feels like to have that kind of money… EVER.

So, here’s the deal. Carl Weininger was celebrating his 60th birthday at Lindeth Howe Country House Hotel in Cumbria. Apparently, his sweet tooth was in full gear and so he opted for the hotel’s chocolate pudding glazed with edible gold and strawberry champagne caviar. Sounds delish!

WHY DID HE DO IT? Because no one just spends that kind of cash on chocolate. Sky News reports say Carl Weininger has been down as of late:

“Buying the dessert was a real boost for my morale. I was dumped earlier this year and felt this could be a decent pick-me-up. It’s not something you do every day and the response has been overwhelmingly positive.”

Talk about eating your feelings!

This isn’t your typical dessert though, This $38,000 plate also includes a two-carat diamond that sits atop a handmade chocolate flower. At least it’s not all just sugar and butter. Carl Weininger actually gets to walk away with a rock bigger than most women’s engagement rings.

Wow! What do you think about all of this!? It almost makes me want to go to the Lindeth Howe Country House Hotel to see it on the menu!! LOL!