How Tall Is Lebron James? I Would Fail Miserably On ‘The Million Dollar Money Drop’ 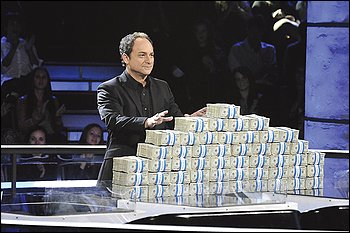 Last night when Bill and I sat down to watch television, we had NO SHOWS recorded! We both sat there in a panic. You mean… we have to watch LIVE television? I don’t understand.

We flipped back and forth between cooking shows (which I vetoed because I don’t need to be looking at food while I’m trying to lose weight), old horror films (which were downright boring), and the news (which I will NEVER watch with Bill because he gets all WORKED UP and we end up fighting).

Then I found the ‘Million Dollar Money Drop’ and it caught my interest. Basically contestants start with a million dollars that they have to bet on very simple questions. BUT these questions are not something you can prepare for. They are totally random. For instance, “how tall is Lebron James?”

So, these are the type of questions that are on the show. How tall is Lebron James and what’s the most common password for computers? You just cannot prepare.

But you can throw up in your mouth while hedging your bets. My heart was racing just watching the couple on television. I mean – talk about pressure! You have like 60 seconds or so to physically move 1 million dollars to your bet. It takes a long time and doesn’t really leave room for second guessing.

When the couple was guessing how tall Lebron James is, they began to think they had the wrong answer… and couldn’t really do anything about it because they didn’t have enough time to move the money.

Then you wait. You wait to see your money drop off the stage if you chose the wrong answer. Bill and I were wide-eyed and in a panic.

Have you seen ‘Million Dollar Money Drop’? I can’t think of the last game show I’ve watched – they’re just not really my cup of tea. But I had fun last night trying something new. Guess we should try live TV more often! 🙂