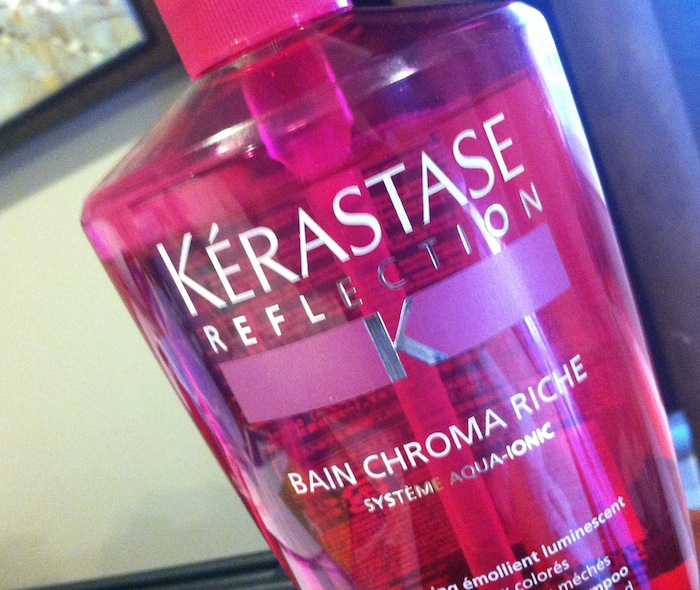 All jokes aside – I can’t believe the difference I’m seeing in my hair ever since I started to use Kerastase Bain Chroma Riche shampoo. The amount of hair frizz I have IS SIGNIFICANTLY LESS as of late. Granted, I got a great haircut a few weeks back and trimmed off a ton of dead ends. I recognize this plays a part in the change. BUT it’s just so much easier to style my hair these days and I know it has something to do with my shampoo change.

While getting a haircut, I was complaining to my stylist that my hair is flat on top and filled with frizz. She asked me what kind of shampoo I use and apparently it was the wrong choice. The frizz isn’t tamed by your conditioner. It’s tamed by your shampoo. At least that’s what she told me.

She said it’s worth paying the few extra bucks to get a quality shampoo and promised I would see a difference. Even though I was skeptical – I bought Kerastase Bain Chroma Riche shampoo. Holy Smokes… I can actually FEEL the change. And I’ve only used it twice!!

It’s more money than I feel comfortable spending. I’m not going to lie. I bought the BIGGEST bottle of Kerastase Bain Chroma Riche Shampoo they had which was about $45 bucks… but I can’t tell you enough how better my hair looks and feels.

Just putting it out there in case you want to give it a shot. Have you ever tried Kerastase Bain Chroma Riche shampoo before?